Guess what, Latino's aren't just the main source of cheap labor in farms, construction sites and meat processing, they're also the major source of manual labor in America's forest industry. And, as usual, they're paying the price in injuries and abuse. But there's something different from the usual exploitation suffered by Latinos at the hand of greedy corporations; this abuse is brought to you by your federal government.

I've been writing this blog for two-and-a-half years, and working in this field for 23 years, and there are still stories out there that amaze and appall me -- and occasionally reporters and news media that continues to impress.

The Sacramento Bee has just published a must-read three part series on pineros, the men who work in the pines.

Guest forest workers are routinely subjected to conditions not tolerated elsewhere in the United States, The Bee investigation found. They are gashed by chain saws, bruised by tumbling logs and rocks, verbally abused and forced to live in squalor. 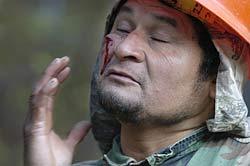 Rainstorms pummel them. Cold winds sweep over them. Hunger stalks them. And death claims them. Across Honduras and Guatemala, 14 guest workers lay in tombs, victims of the worst non-fire-related workplace accident in the history of U.S. forests.

This fall, 17 guest workers slashed through dense stands of pine and fir in Montana's Bitterroot National Forest for a contractor with a history of labor violations: Universal Forestry of Orofino, Idaho.

While cutting a dead tree without safety goggles - another violation - one of them was struck in the face by a branch, which gouged a deep crescent beneath his eye. The company declined to discuss the situation in Montana. But other crew members complained of unsafe working conditions, of unexpected payroll deductions and of hunger.

"We are uneasy because we don't even have enough money to eat," said Luciano Hernández, who said he was down to his last $15.

But unlike the millions of Latin Americans who are in this country illegally, the 10,000 pineros working in the forests are here legally, on H2B visas, at the invitation of the federal government, to plant trees across and thin fire-prone woods out West as part of the Bush administration's Healthy Forests Initiative. But they're hardly treated with the hospitality that guests deserve: And cutting trees is not the only problem.

The number one cause of death among pineros - Latino forest workers - is not the slip of a chain saw or the falling trees known as widow-makers. It is van accidents. And unlike most highway tragedies, the crashes that claim migrant lives are not born of chance alone.

They are the byproducts of fatigue, poorly maintained vehicles, ineffective state and federal laws, inexperienced drivers and poverty-stricken workers hungry for jobs.

"When you add everything up, it's a formula for disaster," said Robert Perez, a Fresno lawyer who has represented scores of Latino laborers hurt and killed in van accidents.

All told, 21 pineros are known to have died in van accidents over just the last three years: 14 in Maine, five in Washington and two in Oregon. But those numbers don't begin to measure the pain: across Guatemala and Honduras, at least 15 women have lost their partners and 69 children no longer have their fathers.

The greatest dangers for pineros are not always the obvious ones. One of the riskiest jobs isn't cutting trees down - it's planting them in the ground, another Canadian report found.

"Planters typically cover 16 kilometers (9.6 miles) per day over difficult terrain," said the study published in the Journal of Occupational and Environmental Medicine in 2002. "In the process of planting, 20 percent will suffer a debilitating injury, a rate far in excess of the all-industry norm of five percent. ... Long-term implications for degeneration of the musculoskeletal system cannot be ignored."

Eladio Hernandez, a former Oregon tree planter, calls it "probably the hardest job in the world."

"Slopes are slippery," he said. "There's poison oak and ivy. Every day, you come back with a fever. It's that difficult. You either get used to it or quit."

The worst part is that this isn't the first time the Bee has written about this problem. There was a flurry of attention after a Bee article 12 years ago and the forest service promised to address the problems. But

Despite calling for tougher law enforcement and assembling a 264-page watch list of troubled contractors, the agency today routinely contracts its work out to reforestation companies that violate state and federal safety, health and labor laws.

"We're not very good at managing things like this anymore," said Stan Bird, a veteran Forest Service contracting officer in John Day, Ore. "Years ago, it was important. But it's gotten lost in the midst of a lot of other priorities."

In the Klamath National Forest in California, federal law enforcement officer Jeff Brown worked a flurry of cases in the mid-'90s involving undocumented workers. Since then, Forest Service reforestation officials have not referred a single case to him. "In my opinion, the problem is still out there," Brown said. "It hasn't gone away."