Killer Spinach: The Human Cost Of Tax Cuts, Small Government and Self Regulation 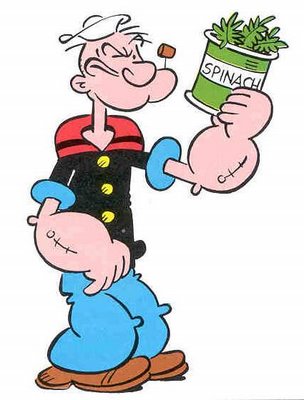 Was life was easier, if not as tasty, when spinach came in cans?

Since the start of the current E. coli spinach outbreak, 166 people in 25 states have been infected with the strain of E. coli O157:H7; 88 people have been hospitalized; 27 have developed a type of kidney failure called hemolytic-uremia, and at least one has died. This strain of E. coli damages the intestinal lining, leading to internal bleeding and organ failure.

The direct cause is spinach contaminated with cow manure that contains the virulent strain of E. coli. But the root causes of toxic spinach affair lie in a host of issues tragically familiar to anyone following the state of consumer and worker safeguards during the Bush administration: weak laws and regulations, budget cuts leading to fewer inspections and weaker enforcement, over-reliance on voluntary efforts instead of mandatory regulations, and industrial cattle raising.

Regulation of meat safety and vegetable safety are conducted differently in the United States. The US Department of Agriculture (USDA) enforces mandatory regulations for meat, fish and poultry in order to "prevent contamination at each step of the process that carries those foods to consumers."

And we're dealing with more than just a bad case of diarrhea:

“In the course of one week, he went from this healthy, lively little boy to a boy in a hospital bed fighting for his life,” said Anne Grintjes, of Brookfield, Wis., whose 7-year-old son developed a dangerous form of kidney failure linked to E. coli, called hemolytic uremic syndrome. “He turned yellow and gray, literally. It was shocking and terrifying and unbelievable to watch.”

Safety of agriculture products, on the other hand, is handled on a voluntary basis by the Food and Drug Administration (FDA). According to Caroline Smith DeWaal, director of food safety for the Center for Science in the Public Interest.

Typically, the FDA and state health department officials can inspect only processing plants and don't venture onto farms unless there's an outbreak. The FDA doesn't have the power to order recalls, though it can seize food before it has gone to retailers if a producer doesn't agree to one. The federal government has more powers when it comes to produce that has a plant disease that threatens other crops

There are historical reasons for the differing treatment, although things have changed today. Meat regulation stems from the publication of Upton Sinclair's The Jungle.

Meat-processing plants have on-site federal inspectors, a practice rooted in an
earlier era when refrigeration was rudimentary. The tradition of looser regulation of the fruit and vegetable industry dates to a time when fresh produce was locally grown, not a commodity shipped cross-country or around the world.

What oversight that exists in agriculture is increasingly underfunded and understaffed largely due to Bush administration budget cuts.

For example, since the FDA hired inspectors in the wake of bioterrorism concerns after the Sept. 11 attacks, the government has been steadily thinning their ranks. The number of FDA staff in field offices around the country shrank from 2,217 in 2003 to 1,962 currently, budget documents indicate.

In the 1970s, the agency conducted about 35,000 food inspections a year, said William Hubbard, former FDA associate commissioner for policy, planning and legislation. More recently, that has fallen to about 5,000 annual inspections, with state officials carrying out about another 4,000.

"There are more than 100,000 food processors in the country. It doesn't take a rocket scientist to do the math," said Hubbard, whose tenure at the agency spanned nearly 30 years.

The FDA tries to set priorities for inspections, so that risky operations are checked more often. Even so, a processed food facility may not see an FDA inspector for years at a time.

"The bottom line is that the food safety effort at the agency grows smaller and weaker year by year, despite continuing food safety problems," Hubbard said.

An FDA analysis last month found that modest increases in the agency's budget had failed to keep pace with inflation in personnel costs, and that the burden had fallen disproportionately on the food division — the equivalent of a 28% cut in its budget from 2004 to 2007.

"As long as the resources available to FDA do not keep up with the realities of increasing costs … it is increasingly difficult for FDA to perform in a way that meets public expectations," the Aug. 10 analysis concluded.

Not only does the regulatory structure differ between meat and vegetables, but so do the available resources:

Last year, the FDA's approximately 800 inspectors conducted about 20,000 food safety inspections of all non-meat products, allowing them to visit a processing plant on average once every few years. By contrast, the USDA, which has an inspector daily in more than 6,000 processing plants nationwide, performs the same number of inspections in a matter of days, said Tony Corbo, a lobbyist with Food and Water Watch.

The state of California also oversees agricultural safety, although tight resources also don't allow the state to keep up with the need:

Consider that 97 percent of irrigation water used in the Salinas Valley comes from private wells. But there is no mandatory inspection of those wells. Irrigation water is only one of several water sources investigators are looking at in trying to explain the latest outbreak.

Cal-OSHA is responsible for checking field sanitation, focusing on rules, that for example, require one port-a-potty for every 20 workers. But with thousands of farms in the state, it on average conducts between 800 and 1,200 annual inspections.

The state Department of Health Services is charged with inspecting processing facilities annually, but the California Department of Food and Agriculture generally does not inspect farms unless there is a problem, state officials say. The FDA, says Halloran, makes site visits about every five years.

Despite the current outbreak and disaster for spinach growers, farmers continue to insist that voluntary compliance -- with enhancements -- is all that's needed.

The presidents of two major trade groups announced the effort after meeting Thursday morning in Salinas with FDA officials and 200 growers, processors, shippers and others.

Thomas Nassif, president of the 3,000-member Irvine-based Western Growers, vowed to swiftly come up with a plan focusing on 'the three Ws' — potential contamination from water, the workforce and wildlife.

Nassif said that it was a cooperative effort and that the FDA was not trying to impose tough new regulations on farmers. He said that the FDA had requested the food safety guidelines. Industry groups hope to present their proposal to the federal agency within a week to hasten the lifting of the fresh-spinach warning.

Of course, everyone doesn't agree that we can continue to rely on voluntary self-regulation:

"They always come back and tell us they don't need mandatory regulations," said
Rep. Rosa DeLauro (D-Conn.), ranking Democrat on the appropriations subcommittee that oversees FDA funding. "We need to examine whether federal agencies have the authority to go on the farms to regulate food safety."

Voluntary guidelines have proven ineffective, said DeWaal, the consumer activist. Cleanliness standards and other safeguards "should be mandated, and government should have the authority to enforce them," she said.

Finally, another cause of this whole affair is industrial farming of cattle. Cows that graze naturally on grass hay, and other fibrous forage don't generate the toxic E. coli that's been the source of the current illnesses. But factory farmed beef that is fed grain that doesn't maintain the acidic conditions in cows' stomachs that kill the bacteria.

The short-term solution to this problem is to stop feeding grain to cattle. But, even if we accomplished this tomorrow, we'd still have to deal with huge existing lagoons of potentially contaminated waste, according to Nina Planck, author of “Real Food: What to Eat and Why." To prevent pollution, the federal government pays 75% of cattle farmers' cost of making manure pits watertight.

Planck thinks the problem lies more with the cattle farmers than the spinach farmers and processors:

Taxpayers are financing a policy that only treats the symptom, not the disease, and at great expense. There remains only one long-term remedy, and it’s still the simplest one: stop feeding grain to cattle.

California’s spinach industry is now the financial victim of an outbreak it probably did not cause, and meanwhile, thousands of acres of other produce are still downstream from these lakes of E. coli-ridden cattle manure. So give the spinach growers a break, and direct your attention to the people in our agricultural community who just might be able to solve this deadly problem: the beef and dairy farmers.

The bottom line here, as with other corporate threats to community and worker health is that voluntary self- regulation works only up to a point. In these days of huge factories that process millions of points of vegetables every day, it's time for the government to step in to "promote the general welfare" and issue the regulations and other safeguards needed to keep our food safe.