Nothing New About Trench Collapses 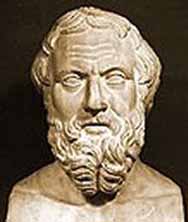 Check out the Weekly Toll below and you'll find a familiar entry at the top: a worker crushed to death in a trench collapse. But how could employers know that a trench would collapse? OSHA's trenching standard for starters.

But Dr. Michael Silverstein also reminds us in his paper, OSHA At 35, the the hazards of trenching -- and how to prevent trenching casualties -- were well known even before OSHA issued its standard -- like somewhere around 2300 years before OSHA. Just ask Heroditus.

All the other nations, therefore, except the Phoenicians, had double labour; for the sides of the trench fell in continually, as could not but happen, since they made the width no greater at the top than it was required to be at the bottom. But the Phoenicians showed in this the skill which they are wont to exhibit in all their undertakings. For in the portion of the work which was allotted to them they began by making the trench at the top twice as wide as the prescribed measure, and then as they dug downwards approached the sides nearer and nearer together, so that when they reached the bottom their part of the work was of the same width as the rest.

-- The Histories of Herodotus, The Persian Wars,