Don't Make Me Hurt You

Here's one I haven't seen before.

A concerned health and safety construction trainer sent me this memo that one of his students from Briggs Engineering in Massachusetts had given him. 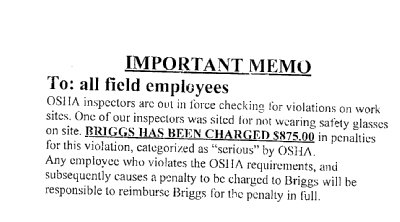 The Briggs employee was distressed by the memo and said that he felt that management was putting the financial responsibility for health and safety program compliance on his shoulders.
The trainer sent a copy of the memo to OSHA asking them if this was OK.

Obviously, if a company can merely shift its fiduciary reponsibility for CFR 1926 safety regulations on to its workforce by way of a memo, this trend will catch on like wildfire nationwide. I trust that this isn't the way you expect a responsible management to behave by threatening or extorting compiance costs out of its workforce to achieve corporate safety program compliance.

If I am wrong on this and this corporate policy is acceptable with OSHA, please let me know so that I can immediately adjust my training curriculum accordingly.

Well apparently, he's going to have to change his curriculum because an the OSHA rep responsible for dealing with discrimination cases told him that OSHA won't intervene unless the company actually carries through with the threat.

Hello? Punishing workers is a violation of the, but threatening to punish workers is just fine as long as you don't actually do it? So if a manager can be so serious in his threats that his employees don't dare "force" him to carry through, it's perfectly fine?

As the concerned trainer said:

It's almost like telling a cop that the guy over there just threatedn to shot me and the cop answering that he won't even talk to the guy until after he does shoot me.

Yeah, except that these are Bush times.