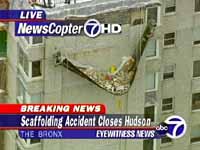 A painter in Queens became the 99th fatality resulting from a fall in New York City since October 2001. Stupid workers? How about the city's "honor system" and weak OSHA enforcement that are allowing unscrupulous contractors and architects to get away with murder, both figuratively and literally,.

The doomed man was trying to attach scaffolding to the building from the roof, but the hookup failed and the apparatus crashed to the ground with him on it just after 11:30 a.m., authorities said.

His partner, who was standing on the roof, called 911. The injured painter was pronounced dead at Elmhurst Hospital Center minutes later.

Investigators said the dead man wasn't wearing a safety harness at the time of the accident. A permit was not required at the site, but the workers should have been supervised by a foreman, according to a Buildings Department spokeswoman.


Many more have been injured. How many is hard to tell, according to a special investigation by the Daily News.

Between 2001 and 2005, OSHA investigated 68 "catastrophic accidents" citywide, meaning at least one worker died or three were seriously injured.

"When a union guy is injured, reports are filed," said David Perecman, a personal injury lawyer who represents many immigrant workers. "But when they are illegal aliens, the boss tells them if it still hurts in the morning go to the hospital and tell them you tripped and fell."


And the problem is getting worse in the city, partly as a result of the biggest building boom in recent history, and partly because of New York City's construction "honor system" which is allowing unscrupulous contractors to build illegal buildings and ignore zoning and safety rules:

"There are contractors who ... are doing it on purpose because they want the adjacent building to fall down or be vacated," Buildings Commissioner Patricia Lancaster said of the shoddy excavations.

In an interview with the Daily News, Lancaster refused to name names. But this much is certain: At the heart of the problem is a cadre of well-known scofflaw developers and shady architects who abuse the Buildings Department's flawed honor system, which allows them to self-certify their work for zoning and building code compliance.

According to the Mayor's Management Report, 43% of all building plans in fiscal 2005 were self-certified. Of those, only 18.9% were audited. And of those audited, 16% had permits revoked.

Two of the "poster boys for building boom boondoggles" are architects Robert Scarano and Henry Radusky who have not only been accused of ignoring zoning rules or building codes at no less than 26 Brooklyn apartment buildings, but three workers have also died on their projects.

The penalties, however, are not exactly cruel or unusual.

Both Scarano and Radusky have settled Buildings Department charges and have agreed to drop out of the self-certification program. But you'd never know that if you visit the department's Web site. Their names are not included on the list of disciplined architects.

Indeed, of the 34 architects and engineers who lost self-certification privileges this year and last, only four are named on the Web site. The rest have escaped public exposure in plea bargain-like deals, Lancaster admitted.

Moreover, none of them has been barred from practicing.

Since 1995, the Buildings Department has asked the state Education Department, which licenses professionals, to discipline 132 architects and engineers. Only 31 have been fined or had their licenses suspended or revoked.

This year, the Buildings Department announced a pilot program to audit all self-certified plans. But it is limited to zoning conformity outside Manhattan. Building code compliance will continue to be audited randomly.

Meanwhile, OSHA isn't doing too much to pick up the slack according to CWA Local 1180 Vice President and NYCOSH Co-Chair Bill Henning.

The Occupational Safety and Health Administration, the federal agency that enforces the job safety and health law, has been starved for funds and staff for so long that the chances of a violation being identified by a random OSHA inspection are almost nil. OSHA’s staff is so small that it can barely inspect five construction sites a day in all of New York State. Even if such inspections uncover violations of safety standards, OSHA penalties are laughably small.

After a violation causes a fatality, the typical penalty is less than $5,000. In almost all cases when a worker is hurt or killed on the job, the only recourse is workers’ compensation, which pays tiny cash benefits.

Just to put that in perspective, last year the city issued 111,283 permits for demolition or construction, and this year the number is expected to reach 130,000.

The only thing working in employees' favor is the the scaffold law section of the labor law in New York which contractors have been trying to repeal:

The "strict liability" contained in that section of the law allows a worker (or the worker’s survivors) to sue an employer for damages when killed or hurt in a fall as a result of an employers negligence.

An employer who violates the scaffold law and kills a worker faces considerable liability, which is why contractors have been trying for years to get the law repealed.

Each year contractors tell the legislature that the scaffold law makes it too expensive to operate in New York State, when the truth is contractor negligence makes it expensive.

There's only one thing that's fairly certain here: fatality number 100 is right around the corner
Posted by Jordan at 11:45 PM