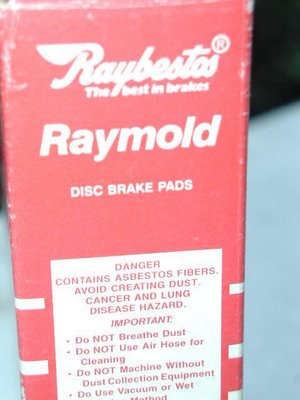 An estimated 60,000 workers die every year of occupationally-related disease, many of which are due to exposure to asbestos. And if the asbestos industry and its friends in government get their way, the bodies will keep piling up.

journalist Andrew Schneider has uncovered evidence that OSHA has threatened to fire an agency scientist for not softening warnings to auto mechinics about the dangers of cancer-causing asbestos in brake linings.

The problem of asbestos in brake linings is so little known that when Washington Senator Patty Murray asked OSHA nominee Ed Foulke at his confirmation hearing last January whether he thought it would be a good idea to ban asbestos, Foulke replied that he wasn't aware that the cancer-causing product was used anymore in the United States. Murray sharply corrected him, listing automobile brake pads as one of the many products in which asbestos can still be found.


Foulke could probably take some comfort in knowing that most Americans are just as ignorant about the hazards of asbestos-containing brake linings as he is. But finally last July, after six years or pressure by public health and labor activists, as well as Senator Murray, OSHA finally issued a bulletin on Asbestos-Automotive Brake and Clutch Repair Work. All's well that ends well? Not quite.

Three weeks after the bulletin was issued, former OSHA head John Henshaw called on the agency to make changes in its warnings, according to documents obtained by the Baltimore Sun. The order went out through OSHA, according to Schneider:

But Ira Wainless, an OSHA scientist who wrote the advisory bulletin about asbestos in brakes, refused, according to agency documents. Wainless cited dozens of studies, including work at his own agency, to show that his presentation of the medical risk to mechanics was solid.

Last week, David Ippolito, an official with OSHA's Directorate of Science, Technology and Medicine, told Wainless that he would be suspended without pay for 10 days if the changes weren't made, according to documents.

OSHA wants the July 26 advisory to include studies, financed by the auto industry, that say that asbestos in brakes does not harm mechanics.

The union rebuttal letter noted that former OSHA chief Henshaw worked with two consulting firms run by Dennis Paustenbach, ChemRisk and Exponent. These firms, according to Stern and documents obtained by The Sun, have been paid more than $23 million since 2001 by Ford, General Motors and Daimler-Chrysler to help fight asbestos lawsuits brought against them by former workers.

Amazingly, Henshaw said that the warning wasn't needed because asbestos is no longer used in the United States. This despite evidence (also reported by Schneider) from experts who estimate that there has been an 83 percent increase in imports of asbestos brakes and brake material into the United States over the past 10 years. Dr. Barry Castleman, a former Baltimore County health officer and a leading researcher on medical and legal issues involving asbestos, estimates that thousands of workers die every year from exposure to asbestos from brake pads.

But this shouldn't be any secret to OSHA, according to Schneider,

In the agency's suspension notification to Wainless, it faulted the industrial hygienist, who is an expert on the recognition, evaluation and control of hazardous materials, with failing to have adequate scientific documentation to support the claim of asbestos' danger. Yet the internal memo to Foulke lists 35 studies and reports.

In that memo, OSHA allows that asbestos can cause cancer, asbestosis and mesothelioma, but it plays down the risk to brake mechanics.

The war against warning auto mechanics about asbestos has been going on for a number of years. In 1986, EPA issued and distributed thousands of copies of the so-called "gold book: Guidance for Preventing Asbestos Disease Among Auto Mechanics. In November 2003, the lawfirm of Morgan, Lewis & Bockius, representing asbesetos manufacturers, petitioned the Environmental Protection Agency "to stop distributing warning booklets, posters and videotapes that give mechanics guidance on the need to protect themselves from asbestos." Senator Murray as been urging EPA to re-issue the publication.

Last year, OSHA officials acted to stop publication of the OSHA bulletin on asbestos in brakes. An OSHA spokesman said that release of publication of a safety and health information bulletin "is not warranted." At that time, Joel Shufro of the New York Committee on Occupational Safety and Health stated that "It borders on criminal negligence for OSHA to have produced a new alert addressed to mechanics but refuse to publish it because it does not conform to a so-called guideline."

Pressure from Murray finally forced the bulletin out last July. According to Occupational Hazards magazine,

Murray placed a legislative "hold" on the nomination of Stephen McMillin for OMB deputy director when she learned OMB ordered OSHA to shelve the publication which was due to be released on March 25, 2005 in fear of potential lawsuits against auto and parts manufacturers for asbestos-related diseases.

Medical experts, needless to say, are outraged and disgusted with this entire story:

"Asbestos causes cancer, whether it is pulled out of a mountain, scraped off a steam pipe or shed from a brake shoe," says Dr. Michael Harbut, who has examined thousands of autoworkers for asbestos disease under a project funded by the Occupational Health Legal Rights Foundation, which is financed by units of the AFL-CIO.

"To withhold these warnings to mechanics who have no knowledge of asbestos or believe it's banned is unconscionable," said Harbut, co-director of the National Center for Vermiculite and Asbestos-Related Cancers at the Karmanos Cancer Institute in Detroit.

The only good news is that this information is being released at a time when something can actually be done about it. How do Congressional oversight hearings sound?