Immigrant Workers Demand Health Screening From Company That Poisoned Them

Last year I wrote about an article in the East Bay Express about the horrendous working conditions of immigrant workers in a facility operated by AXT, Inc, a Fremont, CA, semiconductor company that exposed its employees to airborne arsenic at levels four times the legal limit in 2000. Although CalOSHA issued "Willful" citations and penalties of $313,000 against the company in 2000, the company was cited and fined three times, including another set of "Willful" citations issued in June 2003. Finally, the company closed up shop in Fremont and moved to China.

But the workers that AXT poisoned are still there, still getting sick and still trying to do something about it. They're calling on the company to pay for long-term health screenings and monitoring for gallium arsenic exposures that should never have occurred:

The workers, most of them Chinese immigrants who speak little or no English, say they were not informed about workplace hazards and face a growing fear about their health. They say AXT exposed 500 workers to unhealthy levels of gallium arsenic, a carcinogen and reproductive toxin, and want the company to pay for long-term health monitoring.


Neither the District Attorney's office, nor AXT officials had any comments on the request:

In previous statements, AXT has said it remains "deeply concerned" about the health of current and former workers and that it keeps a "strong commitment to maintaining a safe and healthful work environment" for all employees. 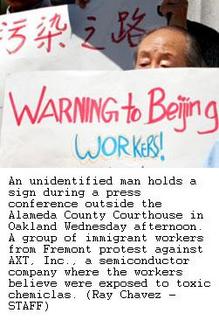 But the employees tell a different story. Until 2003, workers at AXT's Fremont semiconductor substrate plant spent their days polishing and trimming arsenic-based wafers that would end up in voice and high-speed wireless devices, such as cell phones.

Employees described the work as gritty, with vaporized arsenic constantly in the air and arsenic-laced dust coating surfaces. Yet a survey of 209 former employees done this spring by APEN and other community health groups found 7 percent were told by management that the chemicals they were handling could cause cancer or birth defects.

Almost 90 percent said they received no training in how to minimize exposure.