Difference Between Republicans and Democrats

When my children were little, I used to sit them on my lap during the Republican and Democratic political conventions. I wanted to teach them the difference between the two parties as clearly as I could, and in a manner that they could understand at such early ages. 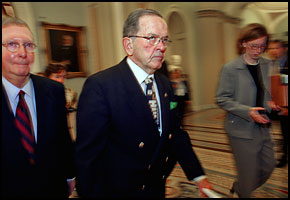 "Children," I said while watching the Republican convention. "Look at how angry and ugly those people are..."

Particularly after they lose a vote.

Sens. Mitch McConnell, left, and Ted Stevens
leave the floor after showdown over drilling in ANWR