It's common practice following an industrial accident to blame the workers involved because they made mistakes or didn't follow proper procedures. And on a shallow surface level, this analysis is not wrong. Workers are human, and being human, they make mistakes.

But stopping with that superficial "blame the worker" analysis doesn't get to the real reason, or "root cause" of the incident. And if you don't address the root causes, similar accidents will continue to happen.In fact, it may make matters worse: punishing the workers involved may give management a false sense that the problem has been resolved.

On January 6th, 2005 a freight train carrying chlorine gas struck a parked train, puncturing the chlorine tanker. Nine workers died of chlorine inhalation: the train's engineer and eight workers in an adjacent factory. 5,400 people within a 1-mile radius were evacuated and 75 were admitted to a hospital for treatment.

The surface cause of the crash was the failure of the crew of the parked Norfolk Southern train to return a main line switch to the normal position after the crew completed work at an industry track, allowing the moving train to switch onto the wrong track and collide with the parked train. 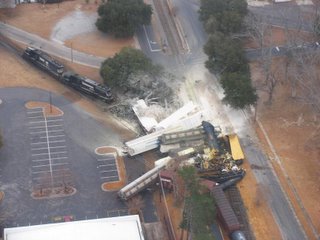 Transportation Secretary Norman Mineta blamed the accident on "human error." Noting that is that type of human error is not addressed by Federal Railroad Administration regulations, he proposed a program that would provide more training and possible civil penalties. In the worst case, employees could be barred from certain train assignments.

Problems solved? Not quite.

The National Transportation Safety Board, which issued its report on the accident at the end of November, agrees that the railroads and the FRA need to look much deeper than just worker error as a cause, and punishing workers as the solution, as summarized by the New York Times.

The crew normally had a set routine
of resetting the switch as they moved the train to the the siding that they had not planned to use. But on this night, the crew strayed from that normal routine because they were just coming off of a 12-hour workday, had a taxi waiting to take them back to their depot and were anxious about finishing before their work hours would violate federal rules.

the tracks in the Graniteville area, near Aiken, S.C., were "dark," meaning that they had no electronic signals that would have allowed a dispatcher to realize that the first crew had forgotten to reset the switch. About 40 percent of the rail network is dark.

The second train, which was moving at 47 miles an hour in a 49-mile-an-hour zone, would have needed half a mile to stop but had less than an eighth of a mile, investigators said.

The engineer, who died in a hospital from chlorine inhalation, was doomed before he got there, they said.

To prevent similar accidents, the Board recommended


As the Times article pointed out, "crashes caused by misaligned switches are common." And one member of the NTSB Board was not happy with the Federal Railroad Commission's response:

Debbie Hersman, a member of the safety board who accompanied the investigators to the scene in January, said that the Federal Railroad Administration had proposed fines for failing to reset switches, but questioned the effect.

"Do we think these things are going to change operating behavior?" she asked.

Like any workplace hazard, slapping workers on the wrist for being human isn't going to help. As the NTSB noted, there are other, more effective ways of preventing these accidents from re-occurring.

The NTSB Synopsis can be found here.