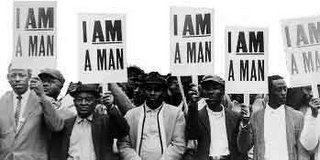 Nathan Newman, on the other hand, returns from his honeymoon just on time to remind us all that Martin Luther King died on a union picket line.

And Confined Space readers might be interested in knowing that the Memphis sanitation workers' strike was sparked by the deaths of two sanitation workers, Echol Cole and Robert Walker, when an electrical short started up the compressor and crushed them to death after they had been forced to take shelter from a storm in the back of a garbage truck.