It's pretty frightening out there for companies just sitting around minding their own business. You've got this new "Change To Win" union things that's boasting "$750 Million per Year Pledged for Organizing," and the AFL-CIO reacting "to New Competition by Pledging Aggressive Organizing of its Own." And then there's all those "Neutrality Agreements, Card Checks, and Corporate Campaigns Used Widely to Unionize Without NLRB Elections."

With all that going on, some of you may be interested in attending one of these workshops on "How To Stay Union Free," conducted by Jackson Lewis. For only $595, you too can learn
But wait a minute, now where have I heard of Jackson-Lewis? That name sure rings a bell.

And by the way, if any of you union finks are thinking of sneaking in, the brochure states that

The discussions are frank. No recording devices are allowed. Individuals affiliated with union organizations are not eligible for registration. Jackson Lewis reserves the right to refuse participation in the program to anyone other than a bona-fide management representative. 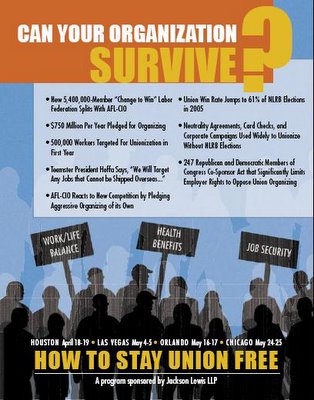