Seems, MSHA and OSHA aren't the only workplace safety agencies not doing their job enforcing the law. CalOSHA has also joined the crowd. And they all have one thing in common -- too few staff to do the job.

Last Spring, the Oakland Tribune ran a series casting heavy doubt on San Francisco Bay Bridge contractor KFM Joint Venture's claim that the project was five times safer than the average heavy construction project. The amazing safety record, according to the Tribune, was likely due to the $100 to $2,500 bonuses that depended on the number of worker hours logged without reporting a recordable injury, rather than safe working conditions. KFM and it's lead firm, Kiewit Pacific Company, also used the stick: suspending workers without pay for reporting injuries.

Cal-OSHA's acting director supported the company, stating that rewarding good safety behavior while disciplining bad is a common practice and one that he sees as effective in reducing injuries.

The Tribune also reported that the company had knowingly exposed workers to welding particulate and fumes including manganese, in excess of Cal-OSHA standards, resulting in what came to be known as the KFM flu. The affected bridge welders were laid off after reporting their illnesses to Cal/OSHA.

But the problems wasn't confined to the company's malfeasence. The watchdogs weren't watching, according to the California state auditor which reported today that

Cal/OSHA didn't discover potential underreporting of alleged injuries and an alleged illness on the project because it lacks procedures to ensure the reasonable accuracy of contractor KFM Joint Venture's annual injury reports.

The audit also found Cal/OSHA failed to adequately follow up on three of six complaints received from bridge workers, including an April 2004 complaint in which it found two alleged serious violations but never issued citations to KFM.

In addition, Caltrans' safety oversight of the project seems sufficient but could be improved, perhaps by increasing attendance at safety training and meetings, the audit found.

did not use its statutory authority to investigate the [welders'] complaint and issue citations for the two alleged serious violations it found. It instead used the compliance assistance approach outlined by its informal partnership with KFM, which precludes issuing citations. In the case of an October 2004 complaint, the division did not investigate at all because of internal miscommunication. In the case of a January 2005 complaint regarding several potentially hazardous situations, the division's response was to query KFM by letter and rely on KFM's assertion the hazards did not exist, even though state law requires it to investigate complaints from employees in a specified period of time unless the complaint is without reasonable basis.

The auditor recommended that Cal-OSHA "design procedures to detect the underreporting of workplace injuries." The report also recommended that if the agency was going to continue its "parternship" strategies, it needed to ensure that the activites would provide "appropriate oversight and be aligned with state law."

The reason Cal-OSHA dropped the ball is because the agency is critically understaffed. The California Association of Professional Scientists (CAPS) issued a press release and report today blaming Cal-OSHA's chronic understaffing for the serious enforcement problems detailed in the State Auditor’s office probe.

“Cal/OSHA does not have enough field inspectors to meet its day-to-day responsibilities, let alone effectively investigate complaints at a huge project like the Bay Bridge retrofit,” charged representative Matt Austin of the California Association of Professional Scientists. “A compilation of the agency’s own organization charts shows that there are only 169 Cal/OSHA inspectors in the field for an economy of 17.9 million workers and more than one million workplaces.”

“Cal/OSHA’s worker-to-inspector ratio is double that of Federal OSHA’s ratio, worse still than neighboring states like Oregon and Washington, and dramatically worse than Canadian provinces like Ontario and British Columbia,” Austin pointed out. “In fact, there are 66 more Fish and Game Wardens in California than there are Cal/OSHA inspectors.”

This lack of staff directly contributed to the conditions on the Bay Bridge and Cal/OSHA's failure to address the problems, according to CAPS.

“The Bay Bridge is an enormous, 10-year project that could keep a full-time team of inspectors busy morning, noon and night. Instead, Cal/OSHA has only had the resources over the last three years to send out individual inspectors on pre-announced, rotating visits about once every other week. The eight inspectors involved, and their supervisors, all have major responsibilities in their home offices, and none were dedicated full time to the bridge,” Austin explained. “This is how important things – like worker complaints – fall through the cracks.”

Indeed, the state auditors report recommended that If Cal-OSHA believes it does not have the resources necessary detect underreporting , it should seek additional funding from the Legislature for this effort. 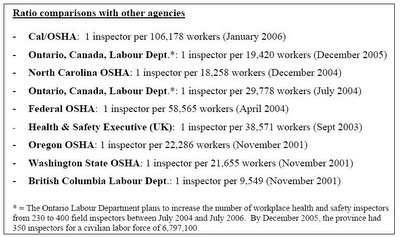 In addition to the staffing problems, Cal-OSHA hasn't had a permanent Chief since July 2002 and has not had a Deputy Chief for Health since November 2000. In addition, Cal/OSHA only has 25 field compliance officers fluent in languages other than English, despite the fact that at least 4.5 million or 25% of the workforce are immigrants, many of whom are not fluent in English.

OSHA state plans are supposed to be "at least as effective" as federal OSHA, not a particularly high bar to pass these days. But CalOSHA can't even seem to reach that goal. And the feds, who are supposed co-fund and monitor the adequacy of state programs, clearly aren't doing their job either. In fact, the amount of federal money going to state programs has not gone up in four years.

Someone's not minding the store. But we knew that already.