In an amazing display of arrogance and insensitivity, Homeland Security's Bureau of Immigration and Customs Enforcement (ICE) has stated that it would continue to impersonate OSHA officials in order to nab undocumented workers, according to Inside OSHA (paid subscription). ICE had previously indicated that it would cease and desist.

Immigration and Customs Enforcement (ICE) officials told immigration and labor groups during a closed-door meeting Jan. 30 that the department will continue to have its agents pose as officials from other agencies, including OSHA, to nab illegal immigrants at work sites, despite earlier signals the policy would be dropped. The meeting was set up to discuss last year's controversial sting operation where ICE officials posed as OSHA employees, which had prompted an outcry from labor groups and concerns from OSHA.

OSHA was not present at the meeting.

ICE officials told attendees of the meeting that the department's first priority is national security and public safety and they would not change their controversial sting policy, according to sources involved in the discussions. In a letter sent to [the National Immigrant Law Center] NILC last year, ICE officials said they would no longer continue the practice, however, they now say they view everything from a threat-based level and would continue to increase their work site enforcement of food production companies and industries related to national security, the sources say.

Since when are food production companies "related to national security?" Does the agency fear that an undocumented immigrant may succeed in unleashing the feared weapons chickens of mass destruction? (And speaking of chickens, the federal government would be better putting its money and energy into mother nature's own chicken-borne weapon of mass distruction -- the avian flu.)

The raid was widely condemned by labor, workplace safety, immigrant rights and public health groups across the country, as well as federal OSHA and North Carolina OSHA. 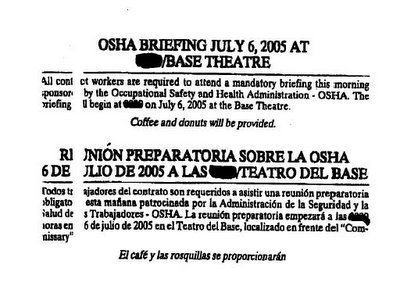 Undocumented workers are killed and injured far more often than non-immigrant workers. They're frequently too afraid they'll lose their jobs to complain about unsafe conditions -- assuming they know where to complain -- and they're often afraid that OSHA inspectors will turn them in to immigration authorities.

OSHA and immigrant worker support groups have gone to great lengths to assure immigrant workers that they have nothing to fear from calling OSHA, although the impersonation tactics seriously undermine those efforts, putting immigrant workers at greater risk of getting hurt or dying in the workplace.

Inside OSHA reports that ICE said it would contact the affected agencies before impersonating OSHA officials again, but refused to say what they'd do if OSHA objected.

Ironically, President Bush's FY 2007 budget calls for an increase of $2.6 million in OSHA's Complaince Assistance budget to expand Hispanic worker outreach. Well, unless OSHA can convince the geniuses at Homeland Security/ICE that they're intimidating Hispanic workers out of any contact with OSHA or health & safety activities, you might as well pour the money down the drain.