Treating Workers Like Hogs: Smithfield Packing Workers Take Their Case To The Country 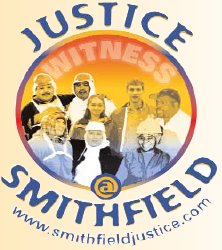 You really can't go to the restroom, you really can't take a break off the floor and it's the kind of work that begs for injury particularly the way it's run. Because obviously Smithfield is looking at the highest productivity for the labor


I've written a lot about the working conditions and notorious anti-union campaign at Smithfield Packing in Tar Heel, North Carolina. But however much I read or write about the plant, it's still hard for me to believe that conditions like this exist in America -- and harder for me to believe that anyone who knows about what happens in this plant could have any question about whether unions are needed in this country.

A federal court decided last month that Smithfield Packing Company had repeatedly broken the law in fighting the UFCW's attempt to organize its pork-processing plant in Tar Heel, N.C. nine years ago. The Court concluded that Smithfield had engaged in "intense and widespread coercion" of workers who were attempting to organize the union, including firing union supporters. Although disagreeing with the Court's findings, the company recently announced that it would not appeal the decision.

The United Food and Commercial Workers union, which is trying to organize the plant, is not calling for a new election. Instead, the union is putting together a coalition of churches, civil rights groups and colleges students to press the company for neutrality in the unionization fight. The union is also not formally calling for a boycott of Smithfield products, but leaving it up to communities to make the choice.

Edward Morrison, a former worker at the plant, tells a story that is tragically typical:

He only worked at the plant for five months last year, working on the kill floor, the toughest job in the plant.

Standing 6 feet 1 inch tall and weighing 235 pounds, Morrison said despite being the oldest man on the floor, working mostly with 20- and 30-year-olds, "They took one look at me and said, 'Okay kill floor.;"

Flipping an average 4,000 hogs that weighed nearly 400 pounds, each shift in temperatures that soared to 125 degrees, the job was taking a physical toll on Morrison.

"My arms would lock up from all this flipping all day long," he recounted.

"My back and my legs would be tired. I would go home and fall in the bed."

He would tell his supervisors of the pains he suffered regularly, but his complaints weren't heard until he tore his meniscus, requiring surgery and physical therapy.

"They sent me a termination letter while I was on medical leave. They said if I couldn't return to work 100 percent, and ready to go to work at my same job that I would be terminated. There was no way I was going to be able to do that same job after knee surgery."

Morrison said Smithfield added further insult to injury by denying his workman's compensation claim, which he is currently suing the company to recover.

Since losing his job, Morrison became a full-time organizer with the UFCW, telling his story and trying to get people to support a union at the Tar Hill plant and anyplace that needs one.

"Before my injury I was an athlete. I was active. I can't run anymore," Morrison says.

"This is something I've got to carry with me for the rest of my life.

In addition to the health and safety problems at the plant, organizers cite racial issues;

The workers and supporter Rev. Graylan Hagler said organizing the union at Smithfield will address other problems at the plant including safety and racial discrimination issues including threatening immigrants with deportation.

Hagler, the pastor of the Plymouth Congregational United Church of Christ in Washington, D.C., is the president of Ministers for Racial, Social, Economic Justice, a coalition of more than 600 congregations.

Hagler and some ministers from the group recently visited the plant and said he was disappointed to see only two Black supervisors in the plant that Human Rights Watch report said was nearly 60 percent Hispanic immigrants and 40 percent Black.
"Basically you have overwhelmingly White supervisors in a plant that is mostly people of color. It's that, it's the issues around safety, it's the issues around workers being able to advocate for themselves," he said.

Morrison explained that Smithfield often tried to divide Black and Latino workers by having them physically separated working in different areas to dissuade any type of solidarity that could help bring a union.

"They would always tell us don't get mixed up in this stuff about the union, if you talk about the union they will fire you, (and) having the Hispanics think they'll bring in INS if they try to vote for a union," he said.

A report published last year by Human Rights Watch (HRW)described conditions at the plant, as well as weak government oversight that makes these conditions possible, according to the report's author, Lance Compa.

Compa and the HRW report list dozens of state and federal shortcomings. These include weak OSHA and USDA laws that permit unsafe line speeds and under-reporting of injuries; a lack of ergonomic standards to require better job training and more frequent breaks; and poor state-level workers’ compensation standards that allow companies to easily delay or deny rightful claims.

"What [Smithfield] workers repeatedly told me is they work in pain, or they work in fear that if they get hurt or if they report an injury, they’re going to lose their jobs," said Compa. "And there’s enough evidence of that, of people being terminated or not being allowed to come back after an injury, that this is not just a deep-seeded fear."

The HRW report also cites excessive line speeds at Smithfield, close cutting quarters, inadequate training and equipment, interference of workers right to organize, discrimination against immigrant workers, and intimidation by the company’s private police department, which until recently, had the power to arrest and detain employees.

Compa summed up the goals of the week's activities:

"It’s clear that the labor movement can no longer make progress as kind of an insulated, go-it-alone entity or organization," author Compa told TNS. "It’s really got to be a social movement that brings in allies in the human rights community, the civil rights community, the religious community, women and farmers, and safe-food activists, environmentalists and so on. That’s the kind of broad coalition that I think can help bring back a stronger labor movement, which is really going to benefit society as a whole."

If you're in Atlanta, Washington DC or Raleigh NC tomorrow, come on out and join the Smithfield workers. More information here.