Time Person Of The Year: Me! 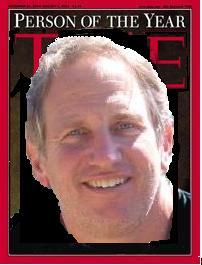 I used to think that winning the Koufax Award for Best Single Issue Blog of 2005 was a big deal, but today I've exceeded that honor. Yes, I am the 2006 Time Person Of The Year, joining the ranks of Franklin Delano Roosevelt, Adolf Hitler, Joseph Stalin, George W. Bush and Harlow Herbert Curtice (huh?)

Person of the Year: You

Yes, you. You control the Information Age. Welcome to your world.

Why, you ask? It's about the many wresting power from the few and helping one another for nothing and how that will not only change the world, but also change the way the world changes.

Who are these people? Seriously, who actually sits down after a long day at work and says, I'm not going to watch Lost tonight. [Not me. I watch Lost AND blog. I just don't sleep.] I'm going to turn on my computer and make a movie starring my pet iguana? I'm going to mash up 50 Cent's vocals with Queen's instrumentals? I'm going to blog about my state of mind or the state of the nation or the steak-frites at the new bistro down the street? [Or people needlessly dying in our nation's workplaces?] Who has that time and that energy and that passion? [Who indeed?]

The answer is, you do. [That would be ME. I do.] and for seizing the reins of the global media, for founding and framing the new digital democracy, for working for nothing and beating the pros at their own game, TIME's Person of the Year for 2006 is you. [ME]


What can I say, except "Thank you." (Although, to be quite honest, the Koufax Award was a bigger honor.)

But seriously folks, think of what the web has made possible in terms of communicating nationwide (or worldwide) the tragedies, stuggles, defeats and victories of victims and families who have been chewed up by work. And more important, take a minute to think about what still can be done. I think we've only just scratched the surface over here at Confined Space headquarters. There's much more to be done, and it's up to you (yes you!) to do it. You control the information age. (And take it from me. You can still watch Lost.)