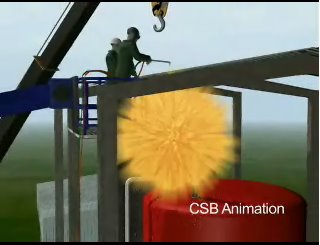 Well, there's at least one agency in this country that cares about the workplace safety conditions of public employees.

The US Chemical Safety and Hazard Investigation Board held a hearing last week laying out the preliminary findings from an explosion at the Bethune Point Wastewater Treatment Plant in Daytona Beach, Florida last January that killed 2 employees. Workers were using a cutting torch above a tank of methanol when vapors from the tank ignited, the flames flashed back into the tank, where an explosion and fire killed two workers and seriously injured another. The CSB found that the workers had not been trained about the hazards of methanol, a flame arrester that was intended to stop the flames from entering the tank malfunctioned due to lack of maintenance, and the pipes attached to the tank were made of plastic, instead of metal, which increased the severity of the fire. (A CSB animation of the incident can be viewed here)

Florida is one of 26 states that lacks a mandatory program that meets OSHA standards, federal officials said. Only a few categories of public workers in Florida are covered by mandated safety standards, including correctional officers and firefighters. The state safety program was eliminated in 2000 and a governor's executive order made such programs voluntary.

"There are 26 states that are in this same situation. That's over half of our country," Merritt said of the lack of safety programs. "It's really quite an amazing situation and why we thought this was a very important case to investigate."

"It is scandalous that wastewater-treatment workers and thousands of other state and local government workers in Florida do not have the most fundamental rights to a safe workplace that every American worker needs and deserves," Brody said.


AFSCME Council 79 represents the workers at the plant.

Better training, construction of the system and maintenance of the flame arrester -- all of which would have been required by OSHA -- would have prevented the deaths, according to CSB investigators:

Robert Hall, who headed the federal investigation, said the explosion may have been prevented if the corroded safety device on the methanol tank had been regularly cleaned or inspected.

The device, called a flame arrester, is commonly used to stop an external fire from igniting chemicals inside a tank. At the Daytona tank, the bread-box-sized aluminum flame arrester, that might have cost less than $500, had corroded so badly that it had gaping holes where flames could pass through, he said.

Flame arresters should be inspected regularly and cleaned of dirt so that they can be effective, Hall said. However, city officials had not cleaned or inspected this device since it was installed in 1993, he said.

The methanol tank also should not have had plastic PVC pipes and valves, but should have had steel pipes, Hall said. The plastic pipes failed, causing methanol to gush onto the crane cab where Jones sat.

Hall also pointed out that Daytona Beach did not have enough safety training for its employees, with the number of training sessions declining since 1997. Facing severe financial woes, the city eliminated the job of safety officer in 2004.

OSHA standards require that employees who weld or use cutting torches receive specific training on the potential hazards and that supervisors must review and control the use of torches.

Hall said Daytona Beach had neither the training nor a control program. If it had, "This accident would not have occurred," he said.