Fighting For Freedom: Iranian Couple Still Trying To Get Their Jobs Back At NIOSH 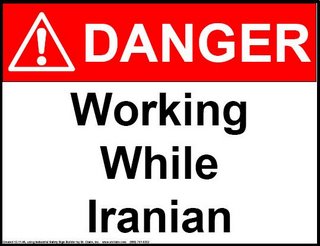 Sometimes you have to wonder if the terrorists have won.

I reported two years ago (here and here) about the firing of Ali and Shahla Afshari from their jobs at the National Institute For Occupational Safety and Health (NIOSH) in Morgantown, WV, because they they “failed to pass a background check” that they didn't even know was happening. Nor have they ever been told of the reasons that they failed. The Afshari's are Iranian natives who had been in the country 18 years when they were fired. They had passed background checks when they were hired in 1996 and in 1997.

And what was the high security work they did at NIOSH? Ali built equipment to study the health effects of welding and asphalt fumes and hand and arm vibrations and Shala worked in a laboratory that researched sensitivity to chemicals in the work place, such as allergic reactions to latex gloves.

Two years later, the Charleston Gazette follows up on the story. The Afshari's still have not learned why they were fired, but they have learned a few new things thanks to a lawsuit they filed. For example,
How it all came down is pretty darn wierd:

The FBI had closed its file on Ali Afshari before officials at the CDC and NIOSH decided to fire the couple, according to a deposition by FBI agent Gary Stoops and a redacted copy of Ali Afshari’s FBI file obtained by their lawyers.

Many of the government officials involved in the Afsharis’ case never saw the supposed evidence against them. One man who did and who recommended their termination was William Porter, director of the Office of Security and Emergency Preparedness at the CDC in Atlanta.

His wife is Diane Porter, who was deputy director for management at NIOSH. At first, Diane Porter said she was very involved in the decision to fire the Afsharis. In a sworn statement, she said she recommended to NIOSH Director John Howard that they be terminated.

Howard himself did not have the security clearance to see the information being used to justify their firing, so he testified that he relied on Diane Porter’s advice.

But in a later sworn statement to the court, Diane Porter took back much of her previous testimony. She said that she couldn’t remember whether she had that conversation with Howard.

The Afsharis are asking to be re-instated in their jobs and reimbursed for attorneys fees and two years of lost income. Of course, the damage has been done:

But no settlement could make up for what they have suffered, Ali Afshari says. That day shook the family to its very core, he said. It shook their faith in themselves and in the United States but did not destroy it, he said. For even as the U.S. government fought them in court, they decided to start the process to become permanent citizens.

“Freedom is not an easy thing,” he added. “Sometimes we must fight for it.”

Azadeh Afshari said this experience has been a test of the best ideals of America. If her family can receive justice, then she will believe ideals such as due process and freedom of religion are more than just words on a piece of paper.

Ali Afshari remains hopeful about the future of his adopted country. He said his family’s ordeal has led him to appreciate the true strength of America.

Uh, John, Julie. This might be a good time to say "Oops, sorry. Nevermind. Our mistake. Is there anything we can do to make this up to you and your family?" Sure hope you don't disappoint them. These days we need more Americans like the Afsharis.