Foulke: Not a Nutcase

Foulke, a professional Republican, is currently a partner with the law firm of Jackson Lewis LLP in Greenville, South Carolina. He served as the Chairman of the Occupational Safety and Health Review Commission (OSHRC) from 1990 to 1994, and from 1994 to 1995 as a Commissioner. Foulke was also a member of the Bush/Cheney Transition team for the Labor Department. 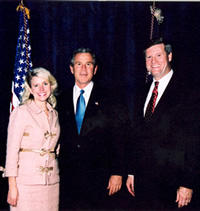 Wendy, "W" and Ed at a
fundraiser that clearly
paid off

Foulke's position as Chairman of the Greenville Country, South Carolina Republican Party was not mentioned in the President's press release, nor was the fact that Foulke was a Bush Pioneer which means that he pledged to gather $100,000 for the 2004 Bush campaign. He is also on the Board of Directors of the Republican National Lawyers Association.

About the best thing I heard about him from one OSHA observer is that he knows OSHA law, he's fairly mainstream, and that he's "not a nutcase," high praise for Bush appointees these days. Although one wonders when reading his biographical materials produced when running for a position on the Republican National Committee in 2004:

Ideologically and policy-wise, Foulke is your typical Republican, frequently wailing over the plight of small business besieged by big bad OSHA inspectors, and extolling the eternal virtues of voluntary programs as the antidote to all that is wrong with the world. He has testified several times on behalf of the Chamber of Commerce on a variety of OSHA issues and written articles warning businesses that the cost of the soon-to-be-repealed ergonomics standard would be "significant and, in some cases, result in severe financial hardship."

While Foulke is at least fairly well known in the workplace safety and health community (especially in Republican circles), Stickler's appointment, on the other hand, was met by a collective "Huh?" by both labor and management.

Stickler has spent his career in the mining industry, mostly as a mine manager, and as Director of the Pennsylvania Bureau of Deep Mine Safety from 1997 to 2003. Stickler was head of the Bureau during the 2002 Quecreek Mine flood that trapped 9 miners who were eventually rescued.

United Mineworkers spokesman Phil Smith emphasized the need for good communication between MSHA and the UMWA. Communication has been good between the UMWA and current acting Assistant Secretary David Dye, although they often don't see eye to eye. Smith urged the Senate to make sure that MSHA fulfills its mandate as a strong watchdog, especially with the current pressures for increased production and the retirement of experienced miners with inexperienced miners now doing more of the work.

Some mine officials weren't quite as diplomatic, wondering where the hell they found this guy. Those who know him aren't expecting aggressive enforcement and express concern that he had spent two years working for a subsidiary of Massey Energy, which has been battling with the Mineworkers for years.