One of my earliest memories is listening to my mother on the phone calling lists of strangers asking them to vote for initiatives that would sell bonds or raise taxes for the public schools. It seems almost quaint now, actually campaigning for a tax increase! It's become almost an eternal truth among many (most) in this country that taxes are bad, government is bad, and the idea of a politician (even a Democrat) campaigning for a tax increase -- no matter how badly its needed -- rates at about as popular as campaigning for child pornography.

I have to explain to my kids when they get their first paychecks what all those deductions are for. But that I can understand. They're kids, not too far beyond believing that ATMs dispense free money.

So if you're one of those (seemingly vanishing) people who wonder how the world has gotten so crazy, how millions are left without medical care, without decent schools, without heat in the winter, drowing (literally) in a crumbling infrastructure -- while Congress hands out huge tax cut after tax cut for those least in need...

For those of you who watch Bush admistration cut taxes for the wealthy and then say we can't afford to fund a basic social needs or maintain a minimum safety net and are reminded of the kid who has killed his parents and then throws himself on the mercy of the court because he's an orphan...read this article by my favorite political analyst and blogger David Sirota in In These Times.

Politicians love to put signs up next to the projects they created saying “your tax dollars at work.” The only way for the United States to have the desperately needed debate over budget priorities is if Democrats find the courage to plant a figurative sign in New Orleans’ flood-drenched streets that says “your tax cuts at work.” Then, and only then, will America’s tax debate transform from a theoretical one that features terrific-sounding promises into a concrete one that highlights the very real consequences of a political system that seeks only to enrich the already rich, no matter what the cost to society. 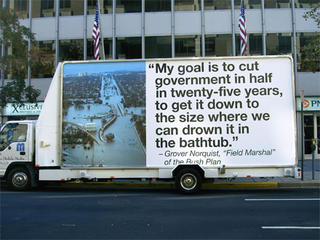 So sure, we can drown government in a bathtup, or we can sell it all to Halliburton, but before we let that happen, we need to make sure that people know the cost.