Happily I was spared most of those stories (and didn't read most of the rest) of them because of the continuing horrors of the aftermath of Hurricane Katrina, followed by the continuing horrors of Hurricane SCOTUS. I've been so overwhelmed, I've actually retreated into normalcy -- reading the paper, doing self-destructive things like mountain biking with my kid, fighting off Alzheimers by playing Scrabble with the family, anything but blogging.

Just looking a the paper every day (even just looking at the photos) is almost more than I can deal with. But then when you actually read the paper....

For example, in the "Are We Feeling Safer Yet" Department, from today's NY Times we have a microcosm of the entire Bush administration:

First there's the Pavlovian (or would that be PavRovian) response to crises that may actually reveal to the American people that the Emperor has not clothes: Blame someone else:

"The way that emergency operations act under the law is the responsibility and the power, the authority, to order an evacuation rests with state and local officials," Mr. Chertoff said in his television interview. "The federal government comes in and supports those officials."

That line of argument was echoed throughout the day, in harsher language, by Republicans reflecting the White House line.

Then we continue to wonder who's in charge, are there actually any adults at home?

In interviews, these Republicans said that the normally nimble White House political operation had fallen short in part because the president and his aides were scattered outside Washington on vacation, leaving no one obviously in charge at a time of great disruption. Mr. Rove and Mr. Bush were in Texas, while Vice President Dick Cheney was at his Wyoming ranch.

This would be the same President who has shattered the record for most vacation time, but assures us that he's because of modern communication, etc., etc, he's really "on the job" even when he's on vacation. Nevermind.

Ms. Rice did not return to Washington until Thursday, after she was spotted at a Broadway show and shopping for shoes, an image that Republicans said buttressed the notion of a White House unconcerned with tragedy.

But this is the "best"

These officials said that Mr. Bush and his political aides rapidly changed course in what they acknowledged was a belated realization of ...

Of what? Three guesses...

"Of the incredible damage suffered by New Orleans?" WRONG

Or maybe "Of the dire and deadly situation faced the neglected poor of New Orleans?" WRONG AGAIN

AND THE ANSWER IS: "Mr. Bush and his political aides rapidly changed course in what they acknowledged was a belated realization of the situation's political ramifications."

That's it. Not broken levies, flooded city, millions of homeless, people dying in the streets, rats eating corpses. No, none of that caused the administration to change course. It was "a belated realization of the situation's political ramifications."

OK, we have a crisis, one of the worst in American history So crisis management is taken over by Homeland Security? FEMA? The army?

As is common when this White House confronts a serious problem, management was quickly taken over by Mr. Rove and a group of associates including Mr. Bartlett. Neither man responded to requests for comment.

Then we have a guy running FEMA whose only qualification was rooming with one of Bush's politically connected buddies in college and being a failed commissioner of the International Arabian Horse Association; a Homeland Security Director who refuses to believe there are thousands of abandoned refugees at the New Orleans convention center, even though it's top news on T.V. and radio across the country. I probably shouldn't be too hard on them. After all, the DHS website says that they've saved 17,000 lives. I can't tell how they're figuring, but if they say so, it's good enough for me.

On the other hand, some of the press seems to be growing cajones. Evolution or intelligent design, I don't know, but I did love this Tim Russert exchange with Homeland Security Chief Michael Chertoff:

MR. RUSSERT: People were stunned by a comment the president of the United States made on Wednesday, Mr. Secretary. He said, "I don't think anyone anticipated the breach of the levees." How could the president be so wrong, be so misinformed?

The amazing thing is looking at how Presidents responded in recent history. Every single one before this one: that would be Clinton, Bush I, and even Nixon launched the federal government into immediate action before the major hurricanes hit and personally supervised the aftermath. Whereas we (or should I say the Alabama, Mississippi and New Orleans) get photo ops, stage-managed events and this: 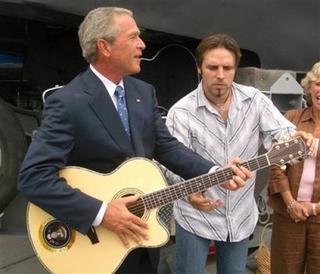 Can we survive three and a half more years of this?

"Wal-Mart provides a chilling example of the damage that low-wage, non-union corporations can wreak, and their business model is going to set the standards for our children unless we do something now," Andrew L. Stern, president of the Service Employees International Union (SEIU), wrote in 2004. "Wal-Mart is the sewer pipe through which good jobs are being flushed."

But a major rift in the AFL-CIO that produced two warring camps in late July has almost certainly derailed that mission and threatened other important labor initiatives. And on Labor Day, union activists, corporate leaders and officials of both political parties are watching closely to determine whether the nation's largest labor federation will emerge from the split stronger and energized, or divided and weakened

Hat tips for all of this to Susie, BillMon, Frank Shiflett and my wife, who brought me the paper in bed this morning.