Today was a bad air day -- as in airplane.

From dawn to dusk the dogs of delay stalked me like a wounded deer without remorse, schlepping from airline to airline, from terminal to terminal, praying for relief.

But there was to be no escape from the wrathful Gods of weather cancellations, computer glitches, ticketing confusion, maintenance problems, more maintenance problems and more weather delays as what started out as a short 5-hour jaunt from the capital of the United States to the capital of Arkansas turned into a 12 hour forced march -- first north, then south -- across half a continent. 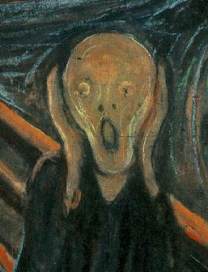 So instead of attending this afternoon’s conference sessions, then enjoying dinner with colleagues and seeing the sites of Little Rock…

Or instead of being home, attending my soon-to-fly-the-coop daughter’s final softball banquet…

I sit alone, by myself, in my hotel room, eating room service, watching television and trying to figure out what the hell’s really happening on Alias and Lost and whether “the others” might actually be the long-lost disciples of Rambaldi.

Then tomorrow, after my speech, I head to the airport to do it all over again, in reverse.

Ah, the romance of travel, the exciting adventures of the brave road warrior….

OK, I suppose it could be worse. Most people don’t even have a blog to complain to.