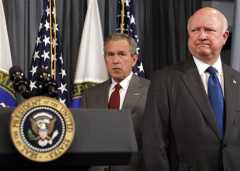 In what may be the waning months of a prematurely lame-duck Republican administration, the orders seem to have gone out from corporate headquarters: Identify any agencies that are doing a good job, or have the potential to do a good job (especially those that might benefit workers) -- and kill them.

The Department of Energy has revealed a plan to eliminate its office for environment, safety and health. The office was created 20 years ago to respond to radioactive contamination of workers as a result of cold war weapons production. Most of the office's current worker safety and health functions would be transferred to an office dealing with security. The current department is headed by an Assistant Secretary, a political appointee, whereas the security agency is headed by a career DOE employee.

The department says the reorganization will combine some related functions that are currently separated, like safety and security.

Deputy Energy Secretary Clay Sell said, "We are trying to strengthen the way we do environment, safety and health policy."

For example, Mr. Sell said, the department had decided to install a Gatling gun to defend the Lawrence Livermore National Laboratory in Livermore, Calif. "I can guarantee you that's also a safety issue," Mr. Sell said.

Under the current structure, he said, "policy and oversight and enforcement organizations have kind of been splintered."

The DOE Office of Environment, Safety and Health is basically OSHA for the roughly 130,000 people who work for the department and its contractors. The contractors are doing highly hazardous work dismantling cleaning up the millions of gallons of radioactive and toxic liquid waste left over from the making of nuclear bombs at weapons plants across the country. In 2002, Congress passed a law giving the Office the authority to enforce health and safety standards against private contractors that have been hired by DOE to clean up the plants. The office also oversees health studies and medical screening programs for workers and surrounding communities exposed to ionizing radiation and other hazardous materials used in DOE operations. The office also conducts environmental impact statements related to agency activities.

Last year, it collected a civil penalty from CH2M Hill, the Hanford contractor, for four violations, including one in which workers were contaminated with radioactive material and another in which a worker received a higher radiation dose than necessary.

A contractor at Pantex, the Texas plant where weapons are assembled and disassembled, mishandled the disassembly of a nuclear weapon when a crack was found in a component. The civil penalty was $124,000. Another contractor paid $55,000 for retaliating against an employee who had raised safety concerns.

OK, those are the facts. So what's going on here?

Basically, what we have here is a continuing war against workers being waged by DOE and its contractors. And workers are losing.

First, the contractors at the nuclear facilities don't want to be bothered with all of these costly and burdensome health and safety rules and penalties. It's a drag to have to shut down an operation to fix machinery, make sure workers have been properly trained, have appropriate personal protective equipment and are working in a safe environment.

While the reorganization doesn't eliminate workers' legal protections, downgrading the agency head from one of seven DOE Assistant Secretaries to a career position weakens the agency's clout. Combining worker safety and health in an security office also does not bode well for workers. If there's a fight over whether funding will be dedicated to site security (gatling guns, gates and guards) or worker safety and health, guess who's going to win? Some observers also fear that this reorganization will be the beginning of the end for DOE's much praised workplace disease screening program.

DOE's Office of Environment Safety and Health has a proud history. During the Clinton administration, under the leadership of Assistant Secretaries Tara O'Toole and David Michaels, the office:

Update: A reader who's lived through many of these developments jogged my memory about the union contribution to these accomplishments.

The original idea for EEOICPA out of the Oil Chemical and Atomic Workers union particularly Tony Mazzocchi before he died, and the AFL-CIO's Industrial Union and Metal Trades Departments. The program is currently being defended largely by the unions and the Government Accountability Project. And The uranium enrichment plant investigations were also a result of years of hard work by OCAW, the IUD, the MTD and a crucial study by Physicians for Social Responsibility.

I'm not adding this information just to give credit to labor unions for most of the major advances in worker protection made by government agencies (although they certainly deserve it). I'm also adding this information to point out that in previous administration (even previous Republican administrations, to a certain extent) government agencies -- and even political appointees -- were willing to provide access to workers, their unions and other public interest allies to talk to them about the workplace health and safety issues that workers face and how government action can effectively address those problems. They worked closely with union representatives to develop programs that would improve working conditions. It's never an easy or totally successful process -- even in Democratic administrations -- but at least labor (and the workers they represent) have been at the table.

Today, instead of information coming up from workplaces, through unions, to government officials, we now have orders transmitted down from the White House (or their corporate sponsors) to the agency heads. And working people are the losers.

Some Senators are not happy with the new plan:

Sen. Jeff Bingaman, D-N.M., the top Democrat on the Senate Energy and Natural Resources Committee, said the change could lessen the emphasis placed on those issues within the Energy Department.

"The functions that the office is set up to do could be given less priority if there's not an assistant secretary with responsibility for those functions," Bingaman said.

Even former Bush I officials are upset at the plan:

Paul L. Ziemer, whom President George Bush named in 1990 as the first head of the office, said in a telephone interview that the contractors who actually performed most of the work at the department had a tendency to put production milestones and schedules ahead of safety or environmental protection and that "the temptation to put those things in a secondary place is much greater if you don't have an independent organization with some level of clout performing oversight."

The war on workers is being waged by DOE Secretary Samuel Bodman. In a story written when Bodman was nominated, the Seattle Times reported:

Bush asked Samuel Bodman, 66, to advance a second-term energy agenda that includes ramping up domestic-energy development to help wean the nation from foreign oil and to push the president's energy plan, which went nowhere the past four years. One controversial proposal: Open the Arctic National Wildlife Refuge to oil drilling.

Bodman could face criticism because of his previous stewardship of a Boston chemical firm, Cabot, which often ran afoul of federal and state environmental laws.

During Bodman's tenure at Cabot, the government twice fined the company — for $100,000 and $75,000, respectively — for failing to report hazardous spills and not complying with federal cleanup orders.

The Energy Daily (paid subscription), which first reported the plan, writes that

The timing of the plan to abolish the ES&H office appears problematic given that the new worker health and safety regulations give the ES&H office new responsibilities for evaluating contractor safety plans and deciding when it is appropriate to grant waivers sought by individual contractors.

Particularly troubling is a plan by DOE's nuclear facilities to subtitute enforcement of standards with a plan to simply penalize contractors responsible through if workers are hurt, or to provide bonuses for superious safety performance. What that means in the workplace is punishing workers for reporting injuries or unsafe conditions.

This is only Bodman's latest attack on workers. Last month, DOE announced

it would no longer reimburse contractors for the cost of their employees’ defined-benefit plans—plans that pay a guaranteed benefit at retirement. Instead, Bush’s Energy Department will pay only contractors’ cost of 401(k)-type programs. Traditional pension plans provide greater retirement benefits to workers.

While the department said the changes only apply to new contracts, it will encourage existing contractors to dump their traditional pensions in favor of 401(k)-type plans. Why is the Bush administration forcing private employers that do work for the government to dump their traditional pension plans? According to the nonprofit Economic Policy Institute:

Part of the story is patronage. The same investment companies that would have benefited from Social Security privatization will earn big fees handling the individual accounts of employees who would otherwise belong to pension plans. The other part is ideology. Bush dislikes collective solutions and would rather see every worker fending for
himself.

Meanwhile, while Bodman attacks the most vulnerable, DOE can't seem to do its main job: cleaning up the old nuclear facilities.

A House of Representatives committee recently called for"serious management reforms" at Hanford's plant and approved a lower budget than requested.

The plant's estimated cost has nearly doubled to $11 billion in a little over a year, and it's not expected to be treating high-level radioactive waste until six or seven years past a legal deadline of 2011. The Waste Treatment Plant is being built to turn radioactive waste left from the past production of plutonium for the nation's nuclear weapons program into a stable glass form.

The plant's estimated cost has nearly doubled to $11 billion in a little over a year, and it's not expected to be treating high-level radioactive waste until six or seven years past a legal deadline of 2011. The Waste Treatment Plant is being built to turn radioactive waste left from the past production of plutonium for the nation's nuclear weapons program into a stable glass form.

A recent CBS 60 Minutes piece related how the DOE unerestimated by 40 percent how strong the building (filled with radioactive liquid) must be to withstand an earthquake, yet allowed the contractor, Bechtel, to go ahead and build the plant anyway. Meanwhile, construction has now been stopped while engineers figure out how to rebuild the plant to meet earthquake specifications.

Clearly, given the mess at Hanford, DOE's priorities are where they belong: cutting back on worker safety and health protections, and weakening pension benefits.