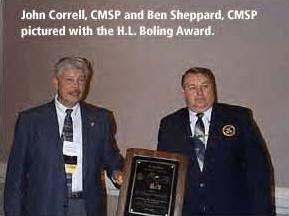 Seems that George Bush's Mine Safety and Health Administration didn't need no stinkin' regulations or enforcement because they were on a mission from God.

I wrote earlier this week about the shady behavior of John Correll, the Bush administration's nominee to head the Office of Surface Mining while he was Deputy Assistant Secretary at MSHA. One of his many problems at MSHA was his connection to not-for-bid contracts that went to longtime friends and associates Gerry Silver and Ben Sheppard. Sheppard obtained a series of contracts worth about $190,000.

And who is Ben W. Sheppard?

Ben W. Sheppard & Associates, LLC are a Christian organization that has unlocked the secrets to achieving continuous improvement. Their behavioral based unique processes have produced results that to date, are unequalled by their competition.

Now that's quite a combination: a faith based organization combined with behavior-based programs (as well as bad grammar).

But Correll apparently isn't the only faith-base safety practitioner at MSHA. Kathy Snyder at Mine Safety Watch noticed a rather strange phrase in an MSHA press release -- strange for a government document, at least in the old days when there was still a separation between church and state in this country.

“We continue to pray for the family and friends of the five miners who lost their lives this past weekend," said acting assistant secretary of MSHA David Dye in making the announcement.

Not "our hearts go out to," the families, not "our sympathies," not "we are profoundly sorry for their loss."

I'm going to step way out of line here, recognizing that the separation- of- church- and-state thing is a silly outworn notion that no public official takes seriously any more. But in my opinion, such a quote in this situation amounts to a tasteless advertisement for the piety of the speaker and -- amazingly -- a whole federal agency.

The place to tell someone you are praying for him or her is in a personal communication, not a press release.

Snyder notes that shortly after she wrote her piece, the phrase was dropped from the press release on MSHA's website.

(Thanks to the kind reader who tipped me to the Sheppard information and photo.)