No Chance For Closure: The Death of Bob Shonkwiler

Below is a speech given at the Philadelphia Workers Memorial Day program by Betsy Shonkwiler, whose husband Bob was killed in 2003 while working for Hoosier Energy in Indiana. She has some tough things to say about the company, OSHA and the union.

I was thrilled when Barb invited me here to speak today. Then the fear overwhelmed me. I am not a public speaker and after writing about 30 speeches I wondered. “Would I want to listen to me?”

Everything I had written went to the shredder. These truths are from my heart without anger directed at anyone. There is no need to assign blame. The truth simply speaks for itself.

I am here today to represent all the voices that have fallen silent due to work related incidents. For me to remain silent is consent, which is something I just can not force myself to do any longer.

I know the grief each family has to endure. I personally know how the surviving families are torn apart by the lack of justice, untrue statements, and the lack of accountability. No chance for closure..Ever.

Would everyone please close your eyes and imagine if you will a small Indiana farm, with an enormous horse barn, 12 beautiful black Percheron draft horses shinning in the evening sun. A lush green hay field on the edge of a woods filled with wild life. 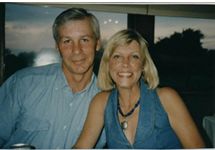 Now I would like for you to see a big sun tanned handsome man, 6’ 2” 280 lbs., silver hair, ice blue eyes. (Bob was an old pro rodeo bull rider.) Holding hands with the same sassy blonde that stands before you today. We are on our way to the hay field sandwiches and beer prepared to view the lunar eclipse, something we never missed. The fires lightening bugs of the year filled the night sky. As we talked and laughed the night away, making plans and promises for the future, I remember having that shiver, smiling at him thinking…I am so happy. I know just how very lucky I am to have a husband that I just couldn’t stop kissing.

The next morning our lives were forever changed.

Our friends grow weary because we just can not get on with our lives; and relationships are something we can only a dream of. Families fall apart. I did not feel like a survivor, I felt like I had been left behind.

It is so hard to touch a grief-stricken person and anything you say could cause emotions to spiral out of control. The life as you knew is over in the blink of an eye.

Co-workers don’t want to talk about the incident because they carry a massive amount of guilt.

I know about deception and consequences. Wrongdoing and untruthfulness is always a betrayal of trust, and an exploitation of others. This was often compounded when I would bring new information to light.

The further betrayals fueled my determination, and fierceness. This was intended to silence me but it made me more determined to find the truth.

The hundreds of stories I have heard are all the same.

There is an enormous difference between accidents and incidents. Tragic accidents happen everyday, everywhere.

Incidents can be prevented. Employers that are negligent should be held accountable in wrongful death situations. If criminal charges were the result, employers, and co-workers would be forced to come forward with the truth.

It was Bob’s turn to work Saturday. The coal plow in B tunnel had been faulting out for several months. Bob was down trying to get it going 3 times the day before. When he came home that Friday night he said, “If they don’t fix the plow soon someone is going to get killed.” Who would have thought in a few hours he would be that someone.

Bob was employed by Hoosier Energy of 22 years, and this would be the last time he would perform this job that he had done millions of times.

There had been lots of rain and the tunnel was flooded. One of the 3rd shift employees had shut the pump down because it was making a strange noise. He just turned it off and did not replace it, let someone else worry about it.

Again the plow faulted, and stopped dumping coal onto the conveyor belt. Bob and his partner were called to reset the plow. His partner was wearing sandals and shorts because there were no mangers working on Saturday, and he did not want to get his feet wet so he waited in the truck.

Bob reset the plow, and when there was not any coal on the belt he walked back 300 feet to check to see if there was something lodged, he climbed up the side of the plow as he always did, his wet feet must have caused him to slip and fall on to the conveyor belt. He became lodged in a metal skirt board, the cause of death? Traumatic asphyxiation.

When Bob failed return; his partner did go look for him, and found him dead.. No action was taken against him. There is a note in his file that documented his failure to wear proper safety equipment. To this day he has never told the truth, and he still wares sandals to work on Saturday.

Bob was dead almost an hour before anyone contacted my daughter Alison stating that he had been hurt at work and was at the hospital.

They did however call his replacement in to work just a few minutes after they discovered Bob.

The debris in tunnel was cleared; the sump pump was replaced to remove the standing water in the walkway.

The radio would not work in the tunnel, the safety pull cord to stop the belt broke when his partner pulled it, no safety monitors or cameras so the control room can view what is going on.

I offered to purchase cameras and monitors, but they would not install them because it would not be possible to keep them clean.

No one from H.E, was present at the hospital, and made no attempt to contact us except to tell me that our insurance cancelled when Bob died.

The company investigation stated Bob was pulled through a 11 X 22” opening between the belt and plow. His autopsy proved the investigation to be incorrect. The head for the safety department called me after a few weeks, she had resigned her position because she refused to sign the investigation report that contained false statements. She stays in contact with me.

The report was somewhat like a “choose your own adventure” because it contains 2 possible ways the incident occurred, and statement in this report may be incorrect because there were no witnesses.

Some of the co-workers still visit with me. Some of the call me when things go wrong, knowing that I will contact OSHA and report it. Most of them would just like to forget it happened. They realize it could have been them. I can’t understand why they don’t band together and try to make it right. When the company tells you, “If you fall we will roll right over you and keep working! Staying safe is up to you not us!” that in itself is the only truth they have told.

The Hoosier Energy Management team did attend the funeral, from the CEO down. They were there.

After 22 years of making them lots of money they didn’t even know who he was.

I called Hoosier Energy this week to see if there was something they would like for me to say about Bob on their behalf, after all he was a loyal employee.

I grew up in a union family so I am familiar with strength and brotherhood.

Union officials understand what families are going through because most have suffered losses. The brothers support each other heart and sole and this compassion needs to be extended to the family of your union brother. My experience was with only one man and I know this was not the opinion of the entire group.

I ask the local B.A. some questions about the incident; he was rude and insulted that I would even suggest Bob was in imminent danger. I asked to be on the agenda to speak to the members from H.E. so I could explain what was happening to our family after all Bob was the first H.E. employee to be killed at work, and what ever happened to his family set precedence. Mr. Kinnett informed me if had any other questions the union attorneys could provide the answers. These members to this day do not know just how powerless the families really are when someone is killed.

Before Scott Kennett became the Business Agent he worked side by side with my husband as a material handler at Hoosier Energy. He knows just how dangerous plant really is because it is an ageing facility that has in house maintenance. I had never personally met him until a few months ago. Even though he told the co-workers how he came to our house and talked to me. How quickly some people forget where they came from.

The OSHA inspector contacted me because sometimes families can provide information that co-workers usually do not want to talk about. He was very helpful, listened to everything I had to say. He knew that H.E. was responsible but there was only so much he could do.

OSHA has been deregulated to the point that they have no teeth, the fines are a joke, and can be reduced to a very affordable slap on the hand. The message they are sending to companies. It is more cost effective for an employee to die then to shut down a valuable piece of equipment to perform needed repairs.

The OSHA fines for Bob’s accident were for 6 serious violations in the amount of $6,465.00. Very affordable. On the website it is still listed as an accident not a fatality. The fines were for housekeeping, walking surface, and working surface. The personal protective equipment (sandals) was deleted.

We live under this big bubble believing OSHA will keep out workplace safe; the Union will stand behind our families in the event that something goes really wrong, and the company that we are so loyal to really does care about

The families of their employees, and last be not least worker compensation will financially provide our families in our absence.

Every person must be accountable for our own safety!

This is not about Bob and Betsy. Nothing I can say or do will bring Bob back home. This is about the other 6,000 families that are waiting in the wings to join this club of survivors. This is about the people that are going to go to work in the morning and not come home. Will this ever stop? This is about people that make our laws that don’t know what the workplace is really about. They do not have families in the work place so they just don’t give a damn. I have sons that work everyday, I have grandchildren that will some day enter the workplace.

This worries me so.

I am worn out with lies, politics, and people that are just plain unaccountable.

I am 'we the people,' and I am powerless.

After Bob’s death, Tammy Misner and I formed United Support and Memorial for Workplace Fatalities. This website was designed to reach families in similar situations, honor loved ones, and to gain awareness of workplace safety and health issues. . USMWF is here to give you, compassion, understanding, support, and the ability to verbalize in your time of need. Death is a certainty, life is the gift.

"One death is a tragedy; a million is a statistic". We mourn approximately 6,000 tragedies each year. These fallen workers will be foremost in our hearts, after all, they stand for the American family; the American dream.