And speaking of meatpacking plants, a federal court decided yesterday that Smithfield Packing Company had repeatedly broken the law in fighting the United Food and Commercial Workers union's (UFCW) attempt to organize its pork-processing plant in Tar Heel, N.C. nine years ago.

Concluding that Smithfield had engaged in "intense and widespread coercion," the appeals court upheld the labor board's ruling that one worker was improperly coerced when he was ordered to stamp hogs with a "Vote No" stamp. 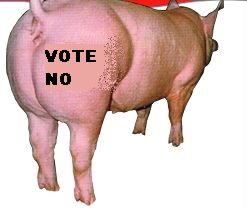 The appeals court ordered Smithfield to reinstate four fired workers, one of whom was beaten by the plant's police the day of the election. The court concurred with the labor board's findings that Smithfield's managers were not credible when they insisted that the four workers were fired for reasons other than their support for the union.

The circuit court noted that Smithfield had illegally confiscated union materials, spied on workers' union activities, threatened to fire workers who voted for the union, and threatened to freeze wages and shut the plant if the employees unionized. The Smithfield plant has 5,500 employees and is the world's largest pork-processing facility. 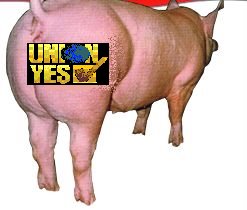 As I wrote before, instead of calling for a new election, the union is putting together a coalition of churches, civil rights groups and colleges students to press the company for neutrality in the unionization fight. Not surprisingly, the company opposes those tactics, boasting about how well management and employees work together, that they don't need a "third party", that neutrality would "bar the company from telling employees about the downside of unionization," workers would be "shielded from the facts," and wouldn't learn the "full story."