Usually, the Bush-appointed leadership of our nation's workplace safety and health agencies just make me mad. Edwin Foulke, our new Assistant Secretary of Labor for OSHA, is starting to make me sick.

Foulke, the man charged by the President of the United States with ensuring the safety of America's workers, made a speech last week entitled "Adults Do The Darndest Things" which displayed a shockingly profound lack of understanding of some of the most fundamental principles of workplace safety, combined with an astonishing insensitivity to the tragic losses that thousands of American families face each year.

The speech marked the launch of North American Occupational Safety and Health Week, also known as: "North American Blame Stupid Workers For Getting Themselves Killed Week." The highlight of the speech was a bunch of photos showing workers doing some of the dumbest things you've ever seen. In fact, you'd almost suspect some of them are staged.

These photos -- the workplace safety version of the Darwin Awards -- have been traveling around the internet for years. And yes, they're funny. I laughed the first few times someone sent them to me. But it's one thing for you or me (or even Ed Foulke) to have a chuckle when these first arrive in an e-mail, but it's quite another for the Assistant Secretary of Labor, the highest workplace health and safety position in the country, to highlight these photos to launch (what's supposed to be) a major health and safety event, sending a message out to employers across the country (there are no unions that participate in North American Occupational Safety and Health Week) that the main reason we have almost 6,000 workplace deaths (and rising) in this country every year is that "workers do the darndest things."

Take these pictures below, for example. What do the represent? Workers too dumb to live, or managers too cheap to purchase or rent lifts or cranes? 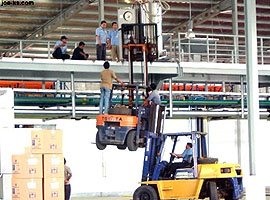 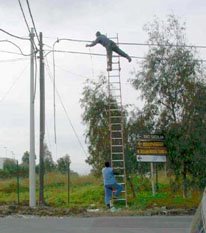 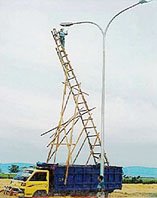 What we're dealing with here is the same old tired "behavioral safety" theory hiding behind "funny.' Behavioral safety theories say that most workplace accidents are caused by worker carelessness or misconduct, and by disciplining workers for making mistakes, or praising them for reporting fewer injuries, accidents will cease to happen. But behavioral theories don't hold up to a closer look at the root causes of most workplace accidents: generally management system and organizational problems that lead to unsafe working conditions. Punishing (or praising) workers for fewer reported injuries may result in less reporting, but not fewer injuries. (Confined Space has covered the issue numerous times before -- Here, here, here, here, and here to name just a few)

So who's laughing at these photos? Probably not Irene Warnock or Coit Smith whose young sons were electrocuted at work. And probably not Mary Vivenzi , whose boyfriend, Kevin Noah was killed falling from Golden Gate Bridge in 2002 while working on an earthquake retrofit project, nor the families of the construction workers killed in the recent Boston scaffold collapse. And I doubt if Tammy Miser, whose brother burned to death in a combustible dust explosion, is rolling in the aisles. Nor Holly Shaw, whose husband fell from a dredging barge and drowned. No life preservers. Pretty amusing.

I know for a fact that Donna Spadaro isn't laughing because she told me. Donna's brother, Gary, fell 25 feet from a cement tower, while shoveling gravel off the hopper to clean it. He had no fall protection or training.

This pathetic attempt at humor insults the families of those killed on the job and dishonors our dead who gave their lives trying to eke out an existence in George Bush’s America, a country where corporate cronyism has replaced competence in our regulatory agencies, to the peril of our nation and its citizens.

And how did Foulke miss this photo? 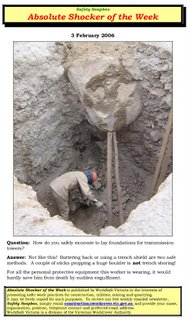 Of course, Foulke is not completely to blame. He's learning from the best. In fact, he was probably just taking a cue from his boss in the White House who showed those hilarious slides of himself looking for Weapons of Mass Destruction under furniture in the Oval Office at the 2004 White House Correspondent's Dinner. I'm sure the families of the thousands killed and wounded in Iraq are still chuckling about that one.

And OSHA isn't the only clueless agency around when it comes to blaming workers for their own injuries and deaths. Last year, the Mine Safety And Health Administration launched a campaign called "Make the Right Decision," which was supposed to be "a safety and health initiative that helps miners and mine operators focus on human factors, such as decision-making, when at work." I'm sure the families of the 12 dead Sago miners, and the other 22 miners who have died this year are mad as hell at their loved ones who must have made the "wrong decision" that got themselves killed.

One more upsetting thing. The other point of the speech was to honor kids who won a workplace safety poster contest. Foulke compared the "funny" workplace photos with the winning kids' posters to remind us

that sometimes kids are a lot smarter than adults give them credit for. These posters here on stage illustrate this clearly. Kids don't always know what their parents do all day at work, but they instinctively understand the importance of them working safely. In contrast, adults could stand to learn a thing or two. 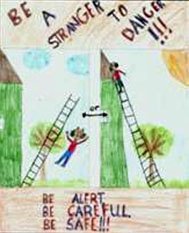 OK, the kids are sweet and posters are cute, except that they all focus on the same "Let's be careful out there" theme. Great, so we're teaching a generation of kids to think that if their parents die in the workplace it's because they weren't being careful? OK, maybe they're too young to get the concept of root cause analysis, management systems and the difference between unsafe working conditions and unsafe behavior, but the Assistant Secretary in his 50's shouldn't be quite so ignorent.

Mary Vivenzi has a better suggestion for a poster:

Refuse the work when safety's not first
your job isn't worth coming home in a hearse.

My idea for a winning kid's poster doesn't rhyme so nicely:

I think there are thousands of families out there who deserve an apology from Mr. Foulke. And Ed, when you're done writing the letters, go take a health and safety class or two. Listen to the kids: "adults could stand to learn a thing or two."

Related Stories
For more on union responses to Behaviour Safety in the US and worldwide, check out Hazards.