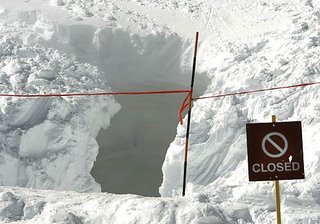 The California Division of Occupational Safety and Health has fined Mammoth Mountain Ski Area nearly $50,000 for the deaths of three ski patrol members last April who fell into a gas vent and were overcome by carbon dioxide.

The largest of the penalties was $18,000 each for the two serious accident related violations of Cal/OSHA regulations addressing training issues. The investigation also revealed that the employer failed to properly identify and evaluate the hazards for working near the areas of volcanic fumaroles, which were known to have high levels of carbon dioxide gas. A third serious citation was issued for not having proper warning signs to indicate a potentially hazardous situation at the location of the fumarole.

In addition to the three serious violations, Mammoth Mountain Ski Area was issued general citations for not conducting proper internal atmosphere testing, not using proper engineering controls and not providing proper respirators for escape or rescue.

It was a tragic event, as reported in the Los Angeles Times:

During most of the year, the vents are harmless because the carbon dioxide fumes they emit dissipate in the air. But in winter, the volcanic gases pool and concentrate in pockets beneath the snow.

On the day of the accident, the fumarole had been covered with a layer of heavy snow, as much as 21 feet. That created a dome over the large crevasse, with poison gases trapped inside.

Some patrollers were trying to dig out a buried fence around the area when the snow around the vent collapsed. James Juarez and John "Scott" McAndrews fell about 20 feet to the bottom of the chute, where gases had accumulated.

Charles Walter Rosenthal, a patrol member and researcher for UC Santa Barbara, went in after them with several other patrollers. Rosenthal died.


What bothers me is the response of Mammoth executives.

But resort Chief Executive Rusty Gregory said that, intent on saving their colleagues and friends, ski patrol members acted "heroically" and went after them despite the rules.

"Heroes sometimes do that," he said. "This has truly broken our hearts forever. This was a huge personal loss for us."

The masks the patrollers wore, Gregory said, were designed to stabilize people injured on the mountain, not for protection against lethal gases.

"The bottom line is that our procedures for carbon dioxide occurrences or any noxious gases is that you don't enter a space where those gases exist," he added. "We lost two patrollers who fell in, and a third … who heroically jumped in to try to save them. He did what great friends do, which is to take care of other people."

Now, confined spaces are well known to health and safety professional as extremely dangerous -- not just to the original victims, but to poorly equipped, untrained rescuers as well. NIOSH has reported that a high percentage of confined space fatalities are rescuers. (more information here and here)

And it's not hard to understand why. You see you buddy passed out down in that pit, and your first instinct is to jump in and save him.

OSHA's confined space standard requires monitoring of confined spaces before entering, and a means to rescue workers without rescuers entering the space unless absolutely necessary, and unless their equipped with an air-supplying respirator.

The standard also requires training -- training workers not to jump in and try to save someone (without training, an air-supplying respirator and backup), or they'll become the next victim(s).

One of the first lessons of confined space, trench or fire, explosion or toxic gas rescue is not to become a victim yourself. We all think of firefighter as heros (and they are), but there are very strict rules for when they are alowed to attempt a rescue, and when they have to give up. As tragic as it is to know that a victim of a fire, trench collapse or confined space is probably going to die, it's more tragic to needlessly lose the life of one or two or more rescuers who aren't appropriately equipped or trained to perform the rescue.

Regulators are around to constantly push for safer work habits, and their work will undoubtedly have an effect at Mammoth. But we're not surprised and almost expect patrol members to go a little beyond OSHA-mandated caution. Patrol members themselves expect it. They realize that danger lurks in their jobs but don't dwell on it.

Yes, it's true that some jobs -- firefighting and ski patrol, for example -- are always going to be inherently dangerous, no matter how many standards, rules, regulations and training. But the standards, training and the rest are there for a reason -- to reduce the risk as much as possible while still being able to do the job. Expecting patrol members to violate the standards is not acceptable. The expectation of their loved ones is that they'll be alive at the end of the shift, and if the worst happens and they don't come home, the most they can hope is that their training, equipment or managers "expectations" weren't to blame.
Posted by Jordan at 12:02 AM