Is Fashion Modeling A Workplace Hazard? 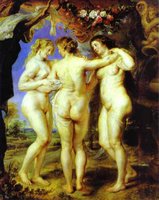 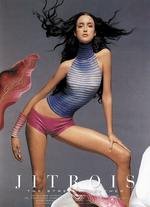 (We're pretty sure she doesn't really belong to us. She was probably a princess who was switched in the hospital, taken from her real aristocratic parents by an evil witch and doomed to spend a dreary life with the slightly broke parents she has now, neither of whom will ever be accused of being too thin.)

But I digress. The government of Spain, it seems, disagrees with the first part of the above sentence.

Some of the world's top models may be about to be kicked off the catwalk after a recent ban on super-thin models from runways in Spain.

The ban on "skinny" models performing in shows, instituted by Madrid Fashion Week organizers after a model died during a show in South America last month, sent shivers around the world of haute.

But many people in and out of the fashion world believe the new ban is long overdue, and should have been considered even before 22-year-old Uruguayan model Luisel Ramos reportedly died of heart failure after stepping off a runway during Fashion Week in Montevideo.


Now a fierce debate has broken out across the blogosphere (well, at least in two blogs) about whether the Spanish government's actions were justified, and (of special interest to Confined Space readers) is whether or not the pressure to maintain a clearly unhealthy weight should be considered a work-related hazard. And if it is, shouldn't OSHA get involved?

In this corner we have Amanda Marcotte from Pandagon who calls Spain's action "entirely sensible" and while it may raise "free speech" concerns,

the truth of the matter is this is basically a necessary protection for the workers so that their employers can’t demand they sacrifice their health in order to keep their jobs.

Meanwhile, over in the other corner, we have Lindsay Beyerstein at Majikthise who has serious misgivings, despite the fact that she's a pro-labor feminist and a civil libertarian. But

The policy is clearly an infringement on the free speech of fashion designers. Design is a form of expression and a fashion show is an aesthetic undertaking. Designing clothes for aesthetic effect is a creative undertaking. If a designer envisions her creations being worn on a certain shape of body, that's her prerogative. Even if we think her aesthetics are indecent or her politics are blinkered and decadent, we should respect her right to realize her creative goal.

She admits, however, that Amanda has a point,

A designer's right to design clothes for emaciated models doesn't necessarily guarantee her right to hire actual people to wear these clothes under dangerous conditions.

How to resolve the problem. Turn to me, of course (as well as a few others who have failed to take up her challenge.) Lindsay asks

How you create labor policies to protect workers from a race to the bottom in competitive industries? How do you balance free expression with the worker's right to be safe on the job? Is there a difference between a safety standard that theoretically protects every worker vs. a standard that can only be expected to benefit the industry on average?

Well, I've contemplated this for a week, waiting for some kind of divine intervention, which hasn't arrived. So, uncharacteristically left with nothing brilliant to say, I'm going to instead ask a few questions and make a few not-so-brilliant observations. And I'm going to pass this along by inviting you, kind readers, to join the discussion. That's why God made comment links.

So, is forced anorexia in order to be a fashion model be considered an workplace health problem, and, if so, what should OSHA (or anyone else) do about it?

The whole point of the Occupational Safety and Health Act is to prevent employers from forcing workers to choose between their jobs and their lives. OSHA regulations are a floor; employers are not allowed to negotiate weaker protections for their employees, even if they provide hazard pay.

I'm trying to imagine OSHA citing a modeling agency for encouraging (forcing) models to attain or maintain an unhealthy body weight, assuming you can define that.

And the remedy would be? Firing them unless they gain more weight? Supervising their ingestion of X calories /day (along with a camera in the bathroom)?

On the other hand, OSHA could theoretically stop an agency from retaliating against an employee for exercising her health and safety rights. On the other hand, the whole process of choosing models is so subjective it would be hard to prove.

Although I'm not holding my breath waiting for any OSHA standards or major enforcement actions in this area (or any other), it's an interesting issue that crosses into a variety of areas such as occupational health, women's rights, public health, job discrimination, the power of the advertising and fashion industry and, of course, wise parenting.

I'm trying to think of another situation where a worker's chief qualification also presents a deadly threat to their health. Are there scenarios that might related?

Should OSHA require medical examinations of all fashion models, and full pay if they're forced to eat? One thing that comes to mind is OSHA's respirator standard. Respirators are sometimes required to protect workers from exposure to toxic chemicals when the exposure can't be prevented through more effective means such as ventilation. The problem with respirators is that they can themselves be a health threat for workers with respiratory or heart problems. OSHA therefore requires medical examinations before workers can wear respirators. You fail the respirator medical exam, you can't do the job. Of course, this isn't exactly the same thing (plus it's possible to use more expensive "supplied air" respirators that don't put a burden on the lungs or heart.)

If anorexia is a work-induced disease, it seems perverse (and possibly illegal) to make women who suffer from the disease unemployable. It would set a very bad precedent to start making people unemployable because of medical/psychiatric conditions that don't affect their ability to do their job.

Which brings to mind a provision that OSHA has in some of its chemical standards called "Medical Removal Protection." If a worker has been overexposed to the point where they're having measurable health effects that can be helped by time away from the exposure, OSHA guarantees them time off with pay and benefits, until they're recovered or until enough time has passed to make it clear that they will never recover. The problem with applying that to fashion models is that the disease that removes them from work is that exact attribute that makes them so attractive to their employer and the public.

And I'm not sure how it relates exactly, but it brings to mind the famous debate in the 1980's when Johnson Controls refused to hire women to work in (higher paying) areas where they might be exposed to lead (which can cause birth defects) unless they could prove that they could not have children -- essentially saying that if you want to work here you have to have yourself sterilized.

That, of course, ended up being an equal opportunity issue (as well as an OSH problems.) What about men, the courts asked? Reproductive hazards generally affect both genders, if not in the exact same way, and women have just as much right to put themselves at risk as men. The answer, of course, was to make the workplace safe for everyone.

Again, I'm not sure exactly how that case relates, but it does raise another interesting question. What about male models? The emaciated male isn't very fashionable I guess.

And as long as we're talking about fashion models, let's fantasize a bit (not that way). OSHA, as those of us who have been in this field for a long time know, is really just a crutch, an aid that can be useful in gaining safer workplaces. But we also know that the best way to get anything in a workplace, including safer working conditions, is a strong, educated and well organized union. So let's imagine fashion models worldwide forming a union and refusing to emaciate themselves anymore. Complete solidarity -- no one mounts the runway who isn't a healthy weight.


Finally, here's another story that's not really related, except that it does deal with the female image and workplace problems. Thin women don't have all the problems: it's not just thin women that have workplace And the, of course, there's this, but that's another story:

The counterman wrote up the customers' objections - "I came for fantasies, not nightmares" being one of the more printable ones - and sent them off in what he thought was a confidential e-mail to the club's board of directors.

However, one board member, who worked as a Lusty dancer, took offense and plastered a printout of the e-mail on the dressing-room mirror for all the entertainers to see.

Talk about an ugly situation.

"It sort of became a guy-versus-girls thing," Lorellie said. "Some said, 'Fire him.' Others said, 'Fire her.' "

Instead, the Lusty board suspended them both.

Then, after talking over the situation with no fewer than three lawyers, the board fired the dancer for making the e-mail public and reinstated the counterman - who already had decided to move on.

The dancer has filed a grievance against the club through the Service Employees International Union Local 790, which represents all the Lusty workers and managers. She hopes to get her job back.

Everyone has agreed to mediation to try to settle the matter.

Moral of the story: Fat or thin, fashionably nude or fashionably dressed, go get yourself a union.

UPDATE: Lindsay sums it up over at Majikthise. 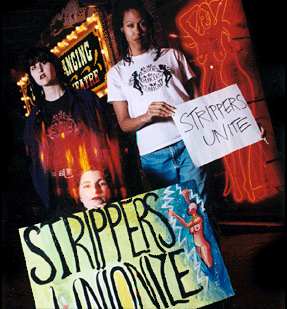