BP Knew About Dangers At Refinery That Killed 15 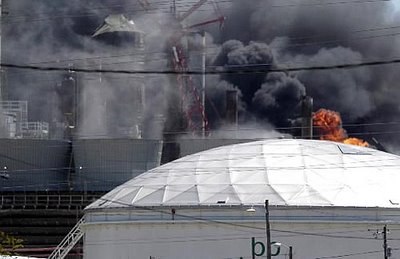 Investigate almost any workplace disaster (or even small accidents) and you'll find that there were plenty of warning signs known to both workers and managers, but there was no existing management system to ensure that such warnings get addressed before disaster strikes. In addition, if you've been following the various investigations of the disaster -- from OSHA, as well as interim reports from the US Chemical Safety Board -- you know that plant managers had numerous warnings of unsafe conditions, malfunctioning equipment and previous "close calls."

So it was not too much of a surprise to hear in tonight's 60 Minutes that the managers at the BP Texas City Refinery that blew up last year, killing 15 and injuring 170, were aware of conditions that led to the deadly explosion.

60 Minutes examined internal BP documents confirming that John Manzoni, the company's executive in charge of refineries, was repeatedly warned by his own experts before the explosion about serious safety problems at the refinery. One report noted that the history of petroleum leaks at the facility near Galveston, Texas, created "the potential for a major site incident."

Manzoni has said under oath that he only became aware of serious safety concerns at the Texas City site on March 23, 2005, the day of the explosion. Asked in a videotaped deposition whether management was aware of the great risk to human life at the site, Manzoni replies: "I believe that ... nobody knew the level of risk at Texas City."

Carolyn Merritt, chair of the US Chemical Safety Board, an independent government agency that is investigating the tragedy, confirmed those findings and blamed it on budget cuts.

Carolyn Merritt, appointed by President Bush to be chairman of the U.S. Chemical Safety Board, says management at BP knew enough about Texas City's safety problems to have prevented the disaster.

"Absolutely," says Merritt to Bradley's question on whether the Texas City blast was preventable. "The problems that existed at BP Texas City were neither momentary nor superficial. They ran deep through that operation of a risk denial and a risk blindness that was not being addressed anywhere in the organization."

Merritt adds that she believes budget cuts at the facility were directly related to the accident. "Twenty-five percent of their fixed costs were cut and when you cut that much out of a budget ... Our investigation has shown that this was a drastic mistake," she says.


Merritt stressed that the incident was preventable:

What's more, she says, the company violated its own policy when it allowed trailers for workers to be placed so near potentially dangerous operations — perhaps the single biggest lapse that led to the deaths and injuries.

Another financial analyst on the program also discussed how it was understandable that BP would make some budget cuts after buying Amoco several years ago, but he asked at what point to you go beyond normal cost-cutting before you're into "reckless behavior?" And another expert noted that the plant was making $1 billion a year. It would have been a few million to correct the problems that had come to their attention. "But would you rather make $1 billion or $998 million?"

The most moving part of the program was the interview with Linda Rowe, who lost both parents in the Texas City explosion. Although the families of the other fatalities have settled with BP, Rowe insists on going to trial -- not because of the money, but because of the information that would remain hidden if not for the trial: "I want everybody to know what they did," Rowe said.

A widow of one of the workers killed at the plant also said that her husband had warned of conditions at the plant.

One of the Baytown-area workers killed in the explosion was Jimmy Hunnings, 58, a quality control specialist for contractor firm Fluor Global Services.

His widow, Linda Hunnings, said Friday her husband told her about the dangers at the plant even before he ever worked there.

“My husband would come home and make the comment, ‘It’s an accident waiting to happen,’" said Hunnings, who received a settlement from the company.

She said her husband, an experienced quality control inspector, had only started working at the BP plant a few months before for a turnaround project. He had resisted working there before because he’d heard about the lack of safety measures, she said.

“To know that they put things on hold, and didn’t really care about people’s safety … it really pisses me off, because it’s an accident that didn’t have to happen and I could still have my husband,” said Hunnings, who has also long worked in the petrochemical industry.

After accidents happen, no matter how many warning signs, no matter how much proof that managers and workers had knowledge that conditions were unsafe, management will always say they had no idea that this would happen, and if they had, they would have done everything in their power to prevent it.

But what they really mean is this: They had no idea that the shortly after 1:00 pm on March 23, 2005, the BP Texas City plant would explode, killing 15 workers in nearby office trailers. This is true, just as no construction manager had any idea that at any specific moment, the trench would cave in on two workers in the 12 foot deep trench without a trench box.