Why Unions Are Good For Nurses -- And Your Health 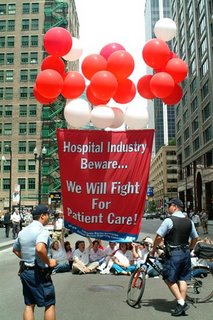 Responding to the NLRB's Kentucky River decision that takes away bargaining rights for millions of American nurses and other workers, Sarah Solon at the DMI Blog explains why unions are good for nurses -- and women. And it goes far beyond just the wages and benefits that most people think of when they think of unions:

The kicker with union contracts and nurses is that 92.3% of nurses are women. Of these nurses, "72% of nurses don't feel safe from assault in their workplace, up to 95% of nurses reported having been bullied at work, and up to 75% of nurses reported having been subjected to sexual harassment at work." 35% of nurses who participated in a given study left their jobs because of verbal abuse from a physician - the primary cause of the bullying and harassment of nurses at work. And let's remember that nurses work in hospitals and other health-care facilities - where their patients long-term health, in not their life, is on the line. Given the huge importance of the tasks nurses must accomplish during their shifts, it's completely unacceptable that "at least 70 percent said blowups with physicians [the most common form of verbal abuse of nurses] increases errors, and nearly as many said it decreases productivity on the job."

The workplace horrors of harassment and bullying are far too prevalent among nurses, and union contracts include provisions for protection from these abuses, many of which are only exacerbated by gender issues. United American Nurses contracts, for example, "put nurses on safety and health committees and purchasing committees, giving nurses an equal say in safety policy and requiring hospitals to buy the safest products available. Contracts commit employers to measures that prevent violence and enforce zero-tolerance on hostile, abusive or disrespectful behavior - from anyone." And in one of their specific contracts, "Nurses at Fairview Hospitals in Minnesota ratified language requiring the hospitals to prevent violence and verbal abuse through patient risk assessments, an annual course on de-escalation, behavior management, physical protection and a trained response team."

Oh, and by the way, your life may depend on it. A recent study shows that 20,000 people die each year because they have checked into a hospital with overworked nurses and union contracts mandate lower patient-to-nurse ratios,
Posted by Jordan at 11:30 PM