Who's Sleeping With The Secretary Of Labor? 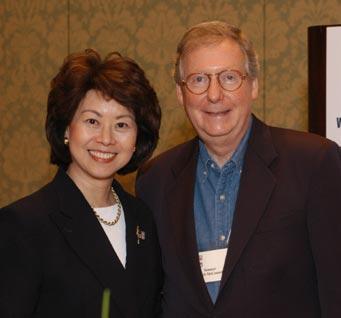 John Cheves at the Lexington Herald Leader has an fascinating article about Secretary of Labor Elaine Chao and the man she sleeps with, Kentucky Senator Mitch McConnell, who also happens to be her husband. Most of it has been reported before (much of it on Confined Space), but Cheves manages to pull it all together in a devastating package.

How does this relationship work in practice?

Millionaire coal magnate Bob Murray knew the name to drop in September 2002, when Mine Safety Health Administration inspectors confronted him about safety problems at his mines: Sen. Mitch McConnell.

Murray, a large man with a fierce temper, is a huge donor to Republican senators. McConnell, R-Ky., rose through the ranks by raising money for those senators. And McConnell is married to Labor Secretary Elaine Chao, whose agency oversees MSHA.

Shouting at a table full of MSHA officials at their district office in Morgantown, W.Va., Murray said: "Mitch McConnell calls me one of the five finest men in America, and the last I checked, he was sleeping with your boss," according to notes of the meeting. "They," Murray added, pointing at two MSHA men, "are gone."

Murray, in a recent interview, denied that he referred to McConnell "sleeping with" Chao.

But nobody disputes that district manager Tim Thompson, at one end of Murray's jabbing finger and the man whose notes recorded the meeting, was transferred to another region, away from Murray's mines. He appealed the transfer for three years until he grudgingly took retirement in January. Labor Department officials refuse to discuss his transfer.

"The ironic part is, I'm a Republican," said Thompson, now a private mine-safety consultant. "But I don't think you should bring up politics at a meeting like that, involving safety."

Probably not, but it was obviously effective.

The Chao-McConnell relationship is of particular interest for workers, particularly mineworkers and farmworkers:

When it comes to workplace-related issues such as mine safety, the McConnell-Chao marriage presents an intriguing target for industry donors. At the Labor Department, Chao has taken what some reports say is a relaxed attitude toward the regulation of coal mines and an approach that labor unions perceive as hostile.

Sometimes Chao achieves what her husband cannot in the Senate, such as a wage freeze her department instituted on certain farmworkers.

And her job has been a perfect vehicle to put her conservative political philosphy into action:

Chao is staunchly conservative. Speaking at a Washington event in May, she said, "Often, people come into public service with a zeal to take immediate action. But, sometimes it's not what you do but what you refrain from doing that is important."

And we've certainly seen plenty of "refraining" from doing anything over at OSHA and MSHA during her reign. But the important people are happy.

Few industries were happier to see Chao bring that philosophy to the Labor Department than mining, which has given more than $400,000 to McConnell's Senate campaigns, according to the Center for Responsive Politics.

In early 2001, industry magazine Coal Age listed the various mining executives invited to shape the agency's agenda and wrote that they were "benefitting from high-level access to policymakers in the new administration."

His deputies for policy and operations, John Caylor and John Correll, had been executives at Cyprus Amax Minerals Co. of Englewood, Colo. The company's PAC gave $17,000 to McConnell and $15,000 to the National Republican Senatorial Committee while McConnell and Law, now Chao's deputy, ran it.

"They stacked MSHA with executives who came straight from the coal and mining companies," said Tom Kiley, a Democratic aide to the House Education and Workforce Committee. "Sure, it's good to have some expertise, but there was no effort to balance that with people from the workers' side. It's totally the fox guarding the henhouse over there."

Other "accomplishments" of the dynamic duo?

The Food Marketing Institute lobbied the Senate and the Labor Department after President Bush took office in 2001 to kill the mandatory ergonomics rules that President Clinton had intended to protect workers from repetitive-stress injuries. The institute says it represents 26,000 grocery stores.

At the urging of the institute and other business groups, in 2001 McConnell and the GOP Senate narrowly approved a resolution declaring that Clinton's safety rules "shall have no force or effect."

But it was Chao, after the food institute's officials approached her, who sealed the deal by replacing Clinton's safety rules with "voluntary guidelines," the institute told its members in a newsletter.

"The proposed voluntary guidelines will give our member companies helpful suggestions," the group's chief executive, Tim Hammonds, said in a statement thanking Chao for "the new spirit of cooperation."

The institute, which had contributed at least $13,000 to McConnell in the 1990s, upped its donations, giving him nearly $13,000 more during Chao's first two years as labor secretary. Officials of the institute declined to comment

And then there's the firing of Jack Spadaro for blowing the whistle on Massey energy due to a massive coal slurry spill in Kentucky. (We've written about that before, here and here.)

The Chao/McConnell Team's philosophy even affects the front line workers who are supposed to be protecting workers' health and safety:

Some MSHA officials talk of being pressured to go soft even when they uncover serious problems.

In April, MSHA inspector Danny Woods told the Pittsburgh Post-Gazette that colleagues wanted to shut down part of a Massey coal mine in West Virginia in January because spilled coal and dust had accumulated along a belt line, raising the risk of a fire. The request was denied. Woods said inspectors were told "to back off and let them run coal, that there was too much demand for coal."

Days later, on Jan. 19, a fire in that part of the mine killed two miners. MSHA spokeswoman Amy Louviere recently said MSHA is investigating Woods' allegation, so she cannot discuss it.

And like any good marriage, when one partner drops the ball, the other one is there to pick it up and run:

Sometimes Chao picks up the ball and runs with it at the Labor Department when McConnell fails to reach a similar goal in the Senate.

For example, McConnell filed legislation for three years, starting in 1998, to curb the mandatory annual raise in wages of legal immigrant farmworkers under the government's H2A program. By 2001, the wage in Kentucky was $6.60 an hour, which struck some agricultural businesses as too high. (Agribusinesses have given McConnell more than $1 million for his campaigns -- out of $21 million from all donors over 22 years, according to the Center for Responsive Politics.) But the bills kept failing.

In 2001, Chao ordered an indefinite delay in the release of an annual Labor Department wage report that triggered the farmworker raise. It was an insider move, not noticed by most Americans, but praised by McConnell's Republican congressional colleagues and business groups in letters obtained from Chao's office.

Farmworker Justice sued Chao on behalf of immigrant workers, and in 2002, U.S. District Judge Gladys Kessler ordered her to resume publishing the wage report in a timely fashion.

And it's always a pleasure to see couples working together toward a shared goal:

In 2002, McConnell filed an amendment to a corporate ethics bill that would force unions -- whom McConnell criticizes for supporting Democrats over Republicans -- to file far more detailed public reports on their spending. His amendment drew protest from unions, and four Republicans joined with Democrats to defeat it.

The next year, Chao announced stricter rules on unions' expense disclosures through the Labor Department's mandatory reporting system. Unions now must itemize every expense of $5,000 or more. The unions protested, but her order was upheld.