Sago Survivors: Too Many Memories 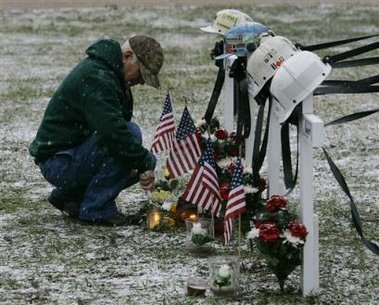 This is a story of the aftermath of the Sago mine disaster for Paul Avington and the 15 other men who escaped from the mine after the initial explosion:

Every day, he worked on the beltline, hauling coal. The tedium bothered him, but the memories bothered him more. He walked daily through the Second Left section, where, on Jan. 2, an explosion trapped 13 men, killing 12 of them.

"I think about it every time I'm in there," Mr. Avington said. After the accident, most accounts talked about the one survivor. One, that's what they always said on television. But 29 men had been under that mountain. Those working that day near the First Left section, about 1,000 feet away from the Second Left, felt seven or eight seconds of hurricane-strong wind that pelted them with debris. A few weeks ago, one of the miners found a half-piece of Denver Anderson's hard hat, ripped apart by the force.

These 16 men, figuring they'd never make it out, climbed to the surface before the first minister or politician or camera crew arrived. They became, in that sense, the one part of the story that escaped. All they got were the scars.


Last month, two men who worked at the Sago mine committed suicide. Not the rest are trying to deal with the aftermath with counseling:

They sipped glasses of water. Mr. Jones and Mr. Perry didn't attend -- both worked now at the Imperial mine -- but neither thought counseling had much benefit, anyway. At first, Mr. Jones had returned to work at Sago, but thoughts about the accident followed him, and he asked for a transfer, saying he could no longer take it.

"Your nerves stay shot," Mr. Jones said. "Every single noise, you jump. Know what I mean? You're on edge all of the time. ... Counseling, I went once. They told me this and that, but I said, 'Just leave me alone.' It don't help you any. You just go on living. If you want to live."