If you live in Washington, you probably saw this front page article about the "angry left" bloggers. The article -- about Maryscott O'Connor of My Left Wing is sort of amusing, and even touching in a way, but the general impression you're left with is that the left blogosphere are a bunch of angry moonbats (as the right would say).

Here's how it begins:

In the angry life of Maryscott O'Connor, the rage begins as soon as she opens her eyes and realizes that her president is still George W. Bush. The sun has yet to rise and her family is asleep, but no matter; as soon as the realization kicks in, O'Connor, 37, is out of bed and heading toward her computer.

Out there, awaiting her building fury: the Angry Left, where O'Connor's reputation is as one of the angriest of all. "One long, sustained scream" is how she describes the writing she does for various Web logs, as she wonders what she should scream about this day.

In fact here's what one of the leading right-wing blogs had to say about the article:

The Washington Post looks at the sick, raging, impotent world of the moonbat blogosphere, with a profile of a woman totally obsessed with hatred....It’s amazing how closely this matches my mental image of these lunatics.

Well, yes and no. The article did kind of give that impression (as did the photo of her. She has a better on on her site.) But if you actually read it, you find that Maryscott is not obsessed with hatred and she's not obsessed with anger. But like many bloggers, she is obsessed with things like injustice, needless wars based on lies, economic policies that blatently favor George Bush's rich supporters, and environmental & energy policies being sold to the highest bidder and on and on. And those things, in turn, make her angry, and they even make her hate those who perpetuate these things -- understandably.

Now, I have to admit that I also have been known to get angry, and that I have, on occasion, expressed myself in rather angry terms in this blog. (Here and here for example. OK, and maybe here too.) But again, we must ask. Am I a demented, "sick, raging, impotent" person, who just happened to imprint on George W. Bush for want of anything better to hate that day?

Or might my anger come from the fact that, in the face of dozens of needless, preventable workplace deaths, and thousands of disabling injuries and illnesses each week, when we have employers committing what any sensible person (and more and more prosecutors) would consider to be homicide and manslaughter, we're plagued with an administration that thinks that they are somehow fulfilling the mandate of the Occupational Safety and Health Act by passing out more factsheets, making more speeches to industry associations, and and prettying up more websites?

But actually, I'm a very gentle man, even tempered and good natured who you never hear complain....Who has the milk of human kindness by the quart in every vein, a patient man am I, down to my fingertips, the sort who never could, ever would, let an insulting remark escape his lips. A very gentle man....

Anway, read the article. There's something so "romantic" -- in a Hemingwayesque sort of way -- about pounding away at your keyboard, a cigarette in your mouth, a whiskey (or non-alchoholic beer) tipping precariously over your keyboard, a photo album of your father, killed in Viet Nam three months before you were born, propped up against the monitor.....

My blogging life is not nearly so exciting. No smoking, no drinking (except an occasional coffee), no tragic personal stories... the most exicting thing that happens in the vicinity of my computer is an occasional "accident" by one of the dogs who don't like to get their delicate feet wet outside on rainy days when the basement carpet is so soft and warm and inviting (who can blame them?)

Finally, I love the photo that accompanies her "Daily Rant." It's what I feel like when I read the paper every morning: 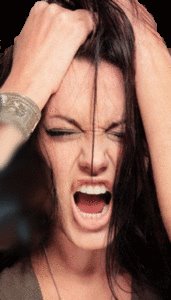