Government To Workers: Cough Your Lungs Out And Drop Dead

Does this ring a bell?

It took two years on the job and a chemical in something as ordinary as butter flavoring to turn a strapping factory worker into someone who sleeps tethered to an oxygen tank.

Francisco Herrera, 32, suffers from an aggressive disease that has destroyed 70 percent of his lungs and could kill him if he doesn't get a transplant. A physician
diagnosed bronchiolitis obliterans after the flavoring plant worker became ill in 2003, concluding that the disease was caused by exposure to diacetyl.

"Everyone knew that the diacetyl was harmful," said Herrera, a father of two who contends in a lawsuit that his employer never warned him of inhalation hazards. "But why didn't anyone tell the workers handling it?"

Yes, it’s “popcorn lung” again, same disease, different location. Confined Space readers will recall a series of lawsuits in Missouri last year filed by workers whose lungs had been destroyed by a popcorn butter flavoring chemical called diacetyl. But exposure to the chemical is not limited to Missouri or to just popcorn. In fact, the National Institute for Occupational Safety and Health has identified the disease in more than two dozen workers from other parts of the food industry.

Famed labor/environmental journalist Andrew Schneider describes in the Baltimore Sun how workers are still getting sick and dying, while federal and state agencies whose job it is to address these hazards are falling down on the job. We’ve already written about how thirty workers at a Missouri popcorn plant sued the manufacturer of diacetyl which ruined their lungs because they weren’t warned to take precautions. And we’ve already learned that the association that represents food additive makers had failed to disseminate information they possessed about the chemicals hazards.

What Schneider does, however, is take a close look at the failure of the US government (and the government of California) to address the problem, despite that fact that aggressively tackling chemical hazards that kill workers is exactly what these agencies were created to do.

Schneider’s investigation has found that

Scientists at NIOSH and the Occupational Safety and Health Administration want to intensify investigations into illness caused by flavorings and issue federal regulations to protect workers. But top officials say they don't plan to act because in their view what is being done now is enough.

That response among agency heads is one example of how government has largely allowed the flavoring industry to police itself. The Food and Drug Administration has let flavoring producers and sellers decide which chemicals are safe, and California's occupational safety agency, Cal/OSHA, has delegated health examinations of flavoring workers to an industry-paid doctor.

Government physicians question the propriety of relinquishing the health evaluations to doctors paid by the plants.

"It needs to be made clear to everyone involved that accepted public health practices do not allow us to rely solely on medical conclusions obtained by industry or its paid consultants," said Dr. Robert Harrison, chief of occupational surveillance and epidemiology for California's Department of Health Services. "This practice would be unfair to the worker and contrary to the process under which we work."

The first problem is that many food flavoring chemicals have never been tested:

The safety of diacetyl, as well as many of the 2,000 chemicals blended to make flavorings, has never been tested by the government. The FDA classified them among substances "Generally Regarded As Safe." It took the word of a panel of scientists hired by the Flavor and Extract Manufacturing Association. Diacetyl was declared safe decades ago because the industry said it was safe, according to a spokesman for the FDA.

About 70 U.S. companies are involved in the making and sales of flavorings, according to the association, which is the largest trade group for the $3 billion-a-year industry. Of more than 8,000 employees, only about 3,000 are engaged in the actual production of flavorings. In the much larger food processing industry, tens of thousands of workers are estimated to work with flavorings.

Schneider has unearthed evidence showing that the Food Extract Manufacturers Association (whose unfortunate acronym is FEMA), had evidence as early as 1977 that the chemical caused lung damage. FEMA is being sued for conspiring with the other defendants to fraudulently conceal information about the health risks of butter flavoring.

The Occupational Safety and Health Administration, which is supposed to regulate worker exposure to hazardous chemicals, had no standard for diacetyl when the problem was discovered in 2000, and the agency has no intention of working on a standard or taking aggressive action. OSHA has published a factsheet for its inspectors which warns of exposure only in 138 popcorn plants. But according to interviews conducted by Schneider,OSHA scientists urged agency leadership to take broader action on diacetyl in 2002 and 2003 because workers are exposed in other food plants as well. NIOSH has also held briefings with OSHA's leaderhip. An OSHA spokesman argued that inspectors had been notified of the risk at “a variety of food processing work sites,” but Schneider’s interviews with OSHA inspectors found that four out of five had never hedard of new inspection orders.

OSHA also refused to consider a new regulation that would protect workers from exposure to diacetyl, much to the disgust of public health experts:

"There is nothing to indicate that additional regulations are needed," [OSHA spokesman Al] Belsky said.

Asked to elaborate, OSHA spokeswoman Kate Dugan said: "We cannot regulate every hazard in every industry. That would be an impossible task." She said OSHA has a "general duty clause" that applies to hazards for which there aren't regulations.

However, this clause puts no responsibility on the employer other than to keep a plant safe.

Michaels, who heads the university's Project on Scientific Knowledge and Public Policy, said: "OSHA could have issued an emergency temporary standard, or at least ordered its inspectors to make sure no more workers are exposed to that hazard. NIOSH scientists proved the terrible damage caused by breathing those chemicals. OSHA did nothing.

"How many more workers like Francisco Herrera are going to lose their lungs before OSHA does its job?"

Michaels, you may recall, along with G.W. Research Associate Celeste Monforton, used the "popcorn lung" story in an excellent article about industry's influence on our regulatory and tort system last year. The article described how industry's influence on our regulatory system has not only hatlted the issuance of regulations that protect workers from exposure to hazardous chemicals, but now they're also attacking the last weapon that workers and consumers have at their disposal: the ability to sue chemical manufacturers who produce products that sicken and kill workers, consumers and communities. The article is essential reading for those who continue to rest quietly under the illusion that the government has the tools to protect us from chemical hazards or that corporate America is working in good faith to learn the truth.

NIOSH, according to Schneider, is about as close to a hero as government agencies come these days – but not quite. After doing excellent investigative work on the chemical and workers who had been exposed, NIOSH issued an important alert in 2002. Since then, the agency has identified victims of the chemical in Maryland, New Jersey, Georgia, Ohio and North Carolina. So far so good, but in order for NIOSH to do its work, it has to get into the workplaces. Unlike OSHA, employers can prevent NIOSH from entering their property, a right they have not been shy about using. Requests by three employees can give NIOSH access, but employees are scared to death about being fired if they complain to NIOSH (Welcome to American in the 21st century!).

There's one other avenue NIOSH can pursue: go before a federal judge to gain entry. But, these are George Bush times:

"The route of forced entry takes time, and the employer will probably fight it," said Fred Blosser, NIOSH's chief spokesman. "You've got to ask if the expenditure of time, effort and money to go the forced-entry route to get into a plant is going to result in actions that benefit the workers. The answer is probably not."

Dr. Richard Lemen, who spent 26 years working for NIOSH, including as its acting director, called that a "dangerous philosophy."

"If workers are sick in the workplace with an illness like bronchiolitis obliterans, which is a life-threatening disease, it is necessary to exercise the NIOSH right of entry and to get in and help these workers as soon as possible," said Lemen, a former assistant U.S. surgeon-general who now works as a public health consultant.

"Without exerting its right of entry, NIOSH is reverting to the days before Congress created it and OSHA, when scientific study of worker health depended on the willingness of employers and workers died needlessly."

Meanwhile, if NIOSH looks bad, and federal OSHA worse, Arnold Schwarzenegger’s CalOSHA isn’t far behind. CalOSHA had fined the factory where Francisco Herrera worked in 2004 and had then promised to work with NIOSH to get into some of the California’s 20 other food flavoring plants that use diacetyl. But nothing has happened. Why not?

Apparently CalOSHA officials decided to let the industry do its own study, rather than NIOSH

Late last year, when [CalOSHA Acting Director Len] Welsh was asked why the inspections of the flavoring plants hadn't progressed, he said that "the person I put in charge had to handle an outbreak of the heat-related illness last year."

But NIOSH was given a different explanation in late summer.

"FEMA does not tell Cal/OSHA what to do and you know that," he told The Sun in an e-mail.

Hallagan, the trade association's top lawyer, said the group has "no power to stop anybody from going anywhere."

Cal/OSHA has the authority to enter any workplace, but Welsh chose to allow a trade association consultant to do the surveys.

"It is just better for everyone if we work cooperatively with the plants or industries we're investigating," Welsh said. "It's much better to go in [to the plants] with their permission rather than strong-arming our way in."

Meanwhile, Back In The Workplace

And what are employers doing? Not enough. Because the haven't gotten the information or because there's notregulations...the result is the same:

Physicians in and out of government say they're frustrated at the lack of action to protect workers. For UCLA's [Chief of the Division of Occupational and Environmental Medicine, Phillip] Harber, who diagnosed Herrera's illness, it's even more infuriating because he has just treated another worker from a second flavoring plant.

On Sunday, in an interview with The Sun, Irma Ortiz expressed more concern about the health of her former coworkers at the small Los Angeles-area plant than about her own difficulty breathing.

Ortiz, 43, said the chest specialist who referred her to Harber had been unsuccessfully treating her for asthma "until I showed him my little list with the chemicals that I worked with." Then, she said, the doctor was able to determine she had brochiolitis obliterans.

"We knew that diacetyl could kill and sicken workers. Although NIOSH proved it years ago, my patient continued working with the chemical without protection," Harber said. "She is a wonderful woman working for her children, and now she's tragically ill and might need a transplant to survive.

And finally, I find very little humor in this line of work, so sometimes I just have to settle for irony. Check out the advertisement accompanying Schneider's article in the Baltimore Sun: 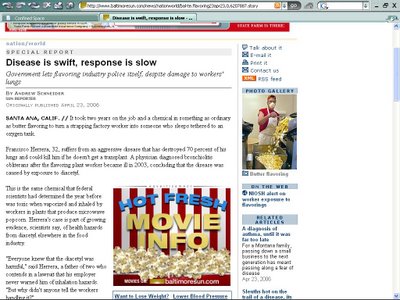