Immigration March: For Flag And Country 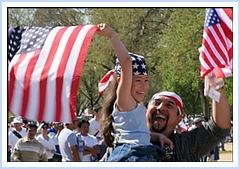 I dropped in on the immigrant rights march down on the Mall in Washington DC today. I couldn't stay long, but it was one of the most powerful -- and joyful -- demonstrations I've ever been to -- surrounded by hundreds-of-thousands, most of whom were probably participating in their first mass demonstration.

And then as I climbed the stairs to the Museum of Natural History and looked down over the crowd, I had the strangest feeling.

Behind the understandable anxiety that mass immigration may stimulate in this economically insecure nation, is an angry, xenophobic, America-for-Americans crowd that's intent on arresting all 12 million undocumented workers and sending them back to where they came from, making felons out of those who remain, and criminalizing those who provide assistance to them.

Yet, when I was down on the mall today, surrounded by hundreds of thousands of men, women and children from other countries, waiving American flags, who just want to be American citizens, I was somehow overwhelmed with a feeling a pride in this country that I don't remember feeling before. Not pride in the "leaders" who continue to betray us, but in the people -- citizens, and hope-to-be citizens -- who see it as their right, their duty and their privilege to demonstrate and speak out against injustice.

Maybe some of the xenophobes should have come down to the mall today. They would have seen a prime example of the kind of people that make this country great.