It is felt with a reasonable degree of medical certainty that the cause of death in this case was directly related to the 9/11 incident.

That statement is, in the words of the New York Times,

the first official link made by a medical expert between the hazardous air at ground zero after the trade center collapse and the death of someone who worked in the rescue effort. 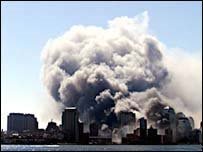 Zadroga spent 450 hours working on recovery efforts at ground zero, filling his lungs with "fiberglass, pulverized concrete and a toxic brew of chemicals that fatally scarred his lungs, leading to his death at the age of 34." His breathing became labored within weeks, he developed a cough and he had to use an oxygen tank to breathe. He retired on disability in November 2004. (More here on Zadroga's death)

"It should be taken very seriously and investigated with great vigor," Dr. Herbert said.

The dust was composed of asbestos, fiberglass, lead from 50,000 computers, and 1.2 million tons of concrete with dangerously high levels of alkalinity.

The concrete may be causing the most damage:

Dr. Phillip Landrigan, who has led numerous studies on exposure to World Trade dust, said the primary component in the plume was pulverized concrete. "The striking thing about concrete is that it can be very toxic when inhaled. It's alkaline, but basically it does the same thing as a very strong acid. It burns and cauterizes tissue," said Landrigan, chairman of community and preventive medicine at Mount Sinai.

The immediate effect of inhaling the dust was a condition now known as "World Trade Center cough."

Two other New York Fire Department Emergency Medical Technicians, Felix Hernandez and Timothy Keller, have also died of the effects of inhaling the dust, according to their families. The New York Daily News reported that 22 other men, most in their 30s and 40s, have died from Ground zero-related disease.

And they won't be the last. The BBC estimates that at least 15,000 persons are suffering from medical problems linked to the 9/11 attacks.

Meanwhile, the Detectives Endowment Association is calling for Zadroga's death to be reclassified as "in the line of duty," ensuring that his daughter, Tylerann, will receive full tax-free pension benefits until she turns 19, rather than a lesser "retirement" pension until she is 12. Tylerann's mother died in 2004.

city, state and federal officials to get their acts together to address the very serious health concerns faced by Ground Zero workers.

Finally, all levels of government must see to it that no one who responded to 9/11 - cops, firefighters, ironworkers, et al. - goes without proper medical attention for lack of insurance. Finally, the NYPD and FDNY must begin to recognize certified Ground Zero deaths as having occurred in the line of duty so that surviving family members are afforded enhanced benefits.

In February, Dr. John Howard, Director of the federal National Institute for Occupational Safety and Health (NIOSH), was appointed to serve as the federal government's coordinator to oversee the response to Ground Zero health impacts. A NIOSH spokesman said that the agency would study Zadroga's autopsy report.

"We haven't seen the (autopsy) report ourselves," NIOSH spokesman Fred Blosser said. "Dr. Howard has said that he will look for and wants to read any report, documentation, information that would provide more details on the illnesses that
are being reported by responders and also these reports of deaths among some 20 responders."