Falling Star: "Voluntary" Protection -- From What? For Whom?

OSHA has just announced a "settlement agreement" with Tropicana Beverages in Bradenton, Florida

after the company was cited for exposing workers to serious safety hazards at the company's Bradenton, Fla., processing plant. The company has agreed to abate all cited hazards and pay penalties totaling $164,250.

So what's the big deal? Well, Tropicana is a "Star" member of OSHA's Voluntary Protection Program -- apparently a falling star, however.

In the VPP, management, labor, and OSHA establish cooperative relationships at workplaces that have implemented a comprehensive safety and health management system. Approval into VPP is OSHA’s official recognition of the outstanding efforts of employers and employees who have achieved exemplary occupational safety and health.

The pinnacle of VPP is the Star Program

The Star Program is designed for exemplary worksites with comprehensive, successful safety and health management systems. Companies in the Star Program have achieved injury and illness rates at or below the national average of their respective industries. These sites are self-sufficient in their ability to control workplace hazards. Star participants are reevaluated every three to
five years, although incident rates are reviewed annually.

In order to get into the program, OSHA conducts a thorough on-site evaluation. Even after a company is approved, "Continuous improvement is expected." And what does the employer get? Removal from OSHA's programmed inspection lists and a big public relations boost (as well as the right to fly the VPP flag). OSHA will still respond to any employee complaints, fatalities or multiple injuries, and perform and onsite evaluation every 2 1/2 to 5 years for Star members.

Tropicana became a VPP member in February 2000. OSHA boasts that:

Before 1988, OSHA inspected the facility 41 times and issued citations for 265 violations. After entering the VPP, and prior to an accident last October, the site was inspected 13 times and cited for only four violations.

Apparently, OSHA should have been inspecting Tropicana a bit more frequently. According to OSHA's press release:

In December 2004, when cleaning procedures changed, a hazard evaluation for use of a flammable liquid in maintenance operations was reportedly not performed and a warning on the container label was not heeded.

OSHA began an investigation in October 2005, after two mechanics were seriously burned by a flash fire that occurred during maintenance operations.

OSHA issued two willful citations, with proposed penalties of $126,000. The company was cited for failing to take adequate precautions to prevent the ignition of flammable vapors produced by a solvent - a mixture of brine, ammonia and oil - used to clean sludge from compressors. The company was also cited for failure to enforce its own policy and OSHA requirements to provide employees with fall arrest equipment when exposed to fall hazards of up to 25 feet during compressor maintenance operations.

The company also received 10 serious citations and a $38,250 fine for failing to establish and implement: a "management of change" program; employee safety training; written procedures to maintain the integrity of equipment; and safety assessments to prevent employee exposure to chemical, "hot work," confined space and electrical hazards.


Willful Citations? Doesn't sound much like "continuous improvement" to me.

But OSHA officials are nothing if not optimistic:

"I have met with officials of Tropicana and parent company, PepsiCo, and believe this event was a wake-up call. I am convinced of their commitment to the high standards of the Voluntary Protection Programs," said Cindy Coe Laseter, OSHA's Atlanta regional administrator. "The October incident at the Bradenton plant, however, underscores the importance of continuous safety evaluations, and this employer is renewing their efforts to ensure Tropicana Bradenton will maintain their VPP Star status." 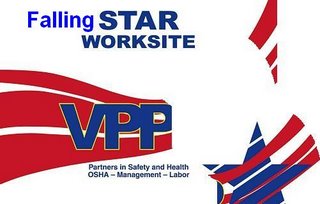 Well, I'm sure we're all so happy that Tropicana's star will not flame out.

But while we rejoice that Tropicana is getting another chance to maintain it's valuable "Star" status, we must also ask ourselves why we're wasting good taxpayer money on this program. The Government Accounting Office warned two years ago that the VPP program is extremely resource intensive. To certify a worksite as a VPP worksite requires a comprehensive on-site review that usually lasts 1 week and involves approximately three to five OSHA personnel, and OSHA plans increase in the number of worksites in the VPP program from 1,056 to 8,000 over the next several years. The GAO warned that the VPP program and other voluntary programs threaten to gobble up growing chunks of OSHA's small budget and will soon start cutting into its enforcement budget. The report also revealed that

Several regional officials—whose offices are responsible for conducting on-site reviews—said that increasing the number of VPP worksites would strain their resources because of the number of staff required to conduct reviews of new worksites and recertifications of existing worksites.

Oh come on, you're just a bunch of whiners. I mean, is any price too high to pay for a company like Tropicana that has "achieved exemplary occupational safety and health" and still has the flag to prove it? What's a few willful citations and burned workers?