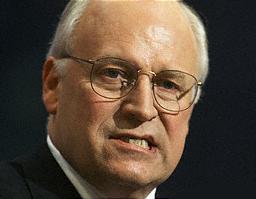 Remember the "Precautionary Principle?" That's what the proposed European chemical law is based on the philosophy that when it comes to chemical hazards, "better safe than sorry" is a better way to go than "chemicals are innocent until proven guilty" which is the way regulation in the US and Europre basically work now.

The blogger at Just Another Jewish Conspiracy (JAJC) alerted me to a discussion currently going on in the blogosphere about how Dick Cheney has come out as a major advocate of the precuationary principle. Cass Sunstein points out that

In his new book, The One Percent Doctrine, Ron Suskind quotes the Vice President as follows: “We have to deal with this new type of threat in a way we haven’t yet defined. . . . With a low-probability, high-impact event like this . . . If there’s a one percent chance that Pakistani scientists are helping al Qaeda build or develop a nuclear weapon, we have to treat it as a certainty in terms of our response.”

A commenter on another blog, Conservative Apikorus points out this discrepancy:

What a great point! What could the Precautionary Principle be more relevant to than the environmental debate? Even the most die-hard skeptic must admit that there's at least a 1% chance of at least a million deaths sometime in the next century if we don't curb global warming! By Cheney's logic, we must treat devastating global warming as a certainty! Why isn't Cheney campaigning for drastic environmental measures?

And why aren't OSHA and Congress using this same Precautionary Principle to justify the updating of all OSHA chemical standards?

I'm sure Dick Cheney would think it's a great idea. After all, President Bush has already endorsed a similar idea.