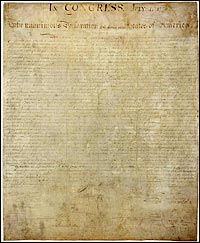 I feel somwhat uninspired lately. So when I feel that way, I go to the other bloggers to help me out. And they rarely let me down.

Here are some of the best 4th of July blog posts:

Quaker Dave has some nice Tom Paine quotes, Brad DeLong cites Frederick Douglas, Nathan Newman asks why we don't consider Ulysses Grant as our greatest president, Kevin Drum has some photos of some patriotic cats, the Mahablog is doing the same thing I am (with excerpts from blogger Susie Madrak, historian Howard Zinn and Pittsburgh Post Gazette columnist Reg Henry), and finally, this 18-year-old reading of the Declaration of Independence by NPR's Morning Edition correspondents never fails to send shivers down my spine.

When in the Course of human events, it becomes necessary for one people to dissolve the political bands which have connected them with another, and to assume among the powers of the earth, the separate and equal station to which the Laws of Nature and of Nature's God entitle them, a decent respect to the opinions of mankind requires that they should declare the causes which impel them to the separation.

We hold these truths to be self-evident, that all men are created equal, that they are endowed by their Creator with certain unalienable Rights, that among these are Life, Liberty and the pursuit of Happiness.

--That to secure these rights, Governments are instituted among Men, deriving their just powers from the consent of the governed, --That whenever any Form of Government becomes destructive of these ends, it is the Right of the People to alter or to abolish it, and to institute new Government, laying its foundation on such principles and organizing its powers in such form, as to them shall seem most likely to effect their Safety and Happiness.

And really finally, after 9:00 tonight (est), you can see my contribution to the 4th over at FireDogLake.