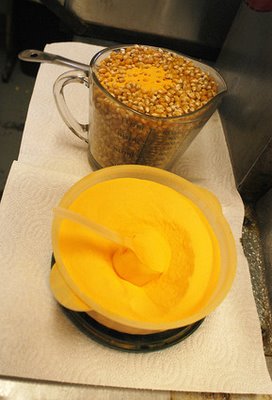 We've become accustomed in this country to framing disasters as single events involving the deaths of numerous workers such as Sago or the BP Texas City explosion. But the deadly damage caused to the lungs of hundreds of workers in this country by a butter-flavoring chemical can only be called a slow-motion disaster. And while OSHA fiddles, the damage to workers' lungs continues.

Two labor unions, the United Food and Commercial Workers and the Teamsters, along with forty of the nation's leading experts in environmental and occupational health, are petitioning the Occupational Safety and Health Administration today for an Emergency Temporary Standard to prevent workers from being exposed to diacetyl, a butter flavoring chemical that has caused a deadly lung disease known as "popcorn lung" among workers in microwave popcorn facilities and other factories where flavorings are used.

According to the UFCW press release

"Three workers have died and hundreds of others have been seriously injured. We will not let food processing workers continue to be the canaries in the coal mine while waiting for the industry to regulate itself," said Jackie Nowell, UFCW Safety & Health Director.

"The science is clear. Now it is time for the Department of Labor to employ their regulatory mandate and protect the public," said Lamont Byrd, Teamster Safety & Health Director

According to the unions, about seventy U.S. companies are involved in the making and marketing of flavorings.

More than 8,000 workers are employed in the flavorings production industry and may be exposed to the dangers of diacetyl and other similar chemicals, and tens of thousands of food processing workers are involved in the production of popcorn, pastries, frozen foods, and candies which uses these chemicals. Even dog food contains this harmful chemical. It is not clear whether consumers are at risk from exposure to diacetyl but certainly the workers who deal with high concentrations of the flavoring chemical are at risk of developing serious and irreversible lung damage.

The petition calls for an airborne exposure limit, respirators for workers exposed above the limit, medical surveillance and airborne monitoring. The petition also calls for OSHA to issue an educational bulletin to all employers and employees, conduct inspections where workers are exposed, and to begin work on a permanent standard covering all food flavorings.

In a Confined Space post about the ravages caused by diacetyl, I asked more than two years ago why OSHA hadn't considered an emergency temporary standard (ETS). OSHA has the ability to issue an ETS if the Assistant Secretary determines that "employees are exposed to grave danger from exposure to substances or agents determined to be toxic or physically harmful or from new hazards." An ETS also serves as a proposed standard until the final standard is issued which must be done within six months. OSHA has rarely used this provision of the act, even in the rare case that the agency has issued an ETS, the courts have often overturned it. No successful ETS has been issued in over 25 years.

The hazards of diacetyl first came to public attention in a 2002 USA Today article. In 2004, thirty workers at a Jasper Missouri popcorn processing plant who had suffered severe lung damage sued the maker of the chemical flavoring, International Flavors & Fragrances, because the Material Safety Data Sheet for the butter flavoring said "Respiratory protection: none generally required" and that respirators were not normally required unless vapor concentrations were "high."

The workers were suffering from what has become known as "popcorn workers lung," or bronchiolitis obliterans—a severe, disabling, and often fatal lung disease experienced by factory workers who produce or handle diacetyl. Many of these workers were so sick that they were awaiting lung transplants. Three workers have died. The tragedy was that the chemical company BASF had known since 1993 that the chemcal caused severe lung damage in rats. After several workers won multimillion dollar lawsuits, the company settled with the rest of the workers.

The National Institute for Occupational Safety and Health (NIOSH) studied the chemical after the workers's health effects became known, finding that the buttery popcorn flavoring eats away at the coating of the lung's airways and is one of the worst lung toxins they had ever seen:

One scientist, research physiologist Jeffrey Fedan, used the words "astonishingly grotesque" to describe the toxic effect of diacetyl, a key ingredient in the flavoring.

Vincent Castranova, chief of NIOSH's pathology and physiology research branch, said that the effect of breathing butter flavoring vapors could be likened to inhaling acid.

"The airway response is the worst we've ever seen," Castranova said. And that's comparing it to a catalogue of notorious respiratory toxins such as asbestos and coal dust.

Then last April, journalist Andrew Schneider described in the Baltimore Sun how workers are still getting sick and dying, while federal and state agencies whose job it is to address these hazards are falling down on the job. Schneider examined the failure of OSHA and California's CalOSHA to address the problem, despite that fact that aggressively tackling chemical hazards that kill workers is exactly what these agencies were created to do. OSHA refused to consider a new regulation that would protect workers from exposure to diacetyl, despite urging by OSHA scientists in 2002 and 2003 to take further action. George Washington University Professor David Michaels called "criminal."

Even the doctor who first diagnosed "popcornworker's lung" is disgusted, according to the Baltimore Sun:

In 2000, Dr. Allen Parmet, an occupational medicine specialist, diagnosed bronchiolitis obiterans in workers in Missouri, the first time that the disease had been found in a popcorn plant.

"We identified the hazard from diacetyl six years ago. We knew how to stop it four years ago, yet no action has been taken by OSHA," said Parmet, who has diagnosed the disease in more than 100 workers, including several who did not work in popcorn plants.

And, as the Sacramento Bee reports,

Relatively few of these food-processing and flavoring workers are unionized. Many of the estimated hundreds in California flavoring plants are immigrants and speak primarily Spanish.

"Who is looking out for them?" Nowell said.

In California, Cal/OSHA officials announced that they are now considering the unions' request, according to the Bee:

"It's certainly a discussion that needs to happen," said Len Welsh, acting director of the California Occupational Safety and Health Administration.

Welsh said Tuesday he will propose a regulation similar to the unions' proposed "permissible exposure limit" for the butter-mimicking chemical, called diacetyl.

Meanwhile, the majority of the estimated 25 flavoring companies operating in California are "voluntarily" examining workers' health and inspecting their plants in exchange for avoiding Cal-OSHA inspections and possible citations, Welsh said.

Under the arrangement formalized in May, the companies must share the results with regulators and allow enforcers to visit their operations to ensure protections are in place.

"We're not leaving it to industry to police itself," Welsh said.

"We're going to be getting into every one of those plants ourselves."

The first California victim, reported in 2004, is a young father of two who worked as a mixer at Mission Flavors & Fragrances near Mission Viejo in Orange County.

The company is appealing the enforcement action.

The other California victim is a mother of three in her early 40s who mixed flavoring components at Carmi Flavor & Fragrance near Los Angeles.

Even the industry seems more favorable toward a standard, according to the Bee:

A flavoring trade group spokesman said his member companies support an OSHA limit for diacetyl, a naturally occurring chemical in butter and other foods that is synthesized and highly concentrated for economy.

The industry had viewed the diacetyl-lung disease link as an open question until the second California victim surfaced in May, said John Hallagan, an attorney for the 120-member Flavor and Extract Manufacturers Association.

But, now, Hallagan said, "this issue needs to be reviewed again, and that's what we plan to do."

Lesson Not Yet Learned

The entire "popcorn lung" disaster shows that workers in this country are still the proverbial canaries in the coal mine. The health effects of chemicals aren't adequately studied, and when they are, the results are hidden -- until someone notices that workers are starting to get sick and die. These workers were "lucky" in a way because diaceyl left its "fingerprint" on his lungs in a relatively short period of time. Had the damage caused by the chemical masked itself as some more common "lifestyle" disease, it may never have been linked back to their working conditions.

Finally, the policy and practice of considering chemicals to be innocent until proven guilty - by the lungs and bodies of workers -- must end. I have written often about REACH, the European Union's proposal to gather and report the quantity, uses and potential health effects of approximately 30,000 chemicals, and about the defects of the U.S. Toxic Substances Control Act. We must call on the U.S. Government to not only stop lobbying against the European proposal, but to advocate for a similar law here.