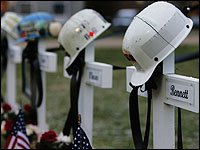 A report on the Sago Mine Disaster, commissioned by West Virginia Governor Joe Manchin, was released today. Although the report failed to identify the initiating cause of the explosion, it found that had the twelve miners would have lived if mine shaft seals had held, the rescue teams had gone into the mine sooner and if there were effective communications system. The report was directed by J. Davitt McAteer who headed the Mine Safety and Health Administration (MSHA) during the Clinton administration.

Most of the facts are well known. At 6:26 a.m., January 2, 2006, an explosion occurred in a blocked of chamber of the Sago Mine in Upshur County, West Virginia. The explosion pulverized the wall sealing off the chamber that was composed of "Omega blocks," constructed from a foam mixture of cement, foam, and fly ash instead of concrete. One miner was killed in the initial explosion, 16 escaped and 12 others tried, but failed to find their way out. As they had been trained, they barricaded themselves behind a curtain and waited for rescue. Rescuers didn't arrive for 41 hours, by which time 11 of the miners had died of carbon monoxide asphyxiation.

One thing the report was not able to verify is if the initial explosion was caused by lightning as Sago's owner, the International Coal Group (ICG) , argued. For that reason, the report is considered preliminary. But ultimately, the report argues, it didn't really matter what ignited the explosion.

In other words, the 12 miners would have survived the explosion had other conditions been in place, namely, had the explosion been contained by explosion-proof seals, had the miners been able to make all of their oxygen-providing self-rescuers work, had it been possible for rescuers to communicate with the miners, had rescue teams been sent into the mine sooner, and had rescuers been able to pinpoint the location of the trapped miners and drill a borehole down to them.

The report placed no blame on the company, MSHA or any individuals, although it holds open the possibility of finding fault should new information reveal, for example, that ICG had failed to ground the electrical system, or that NIOSH and MSHA used faulty protocols to test the "explosion proof" seals. Nevertheless, the report argues

The failures we describe above and throughout this report were, in almost every instance, failures not of individual human beings but of systems: mine safety systems, mine emergency management systems, and mine rescue systems that are in desperate need of immediate help. One of the inescapable lessons of the Sago Mine disaster is that it could happen again tomorrow — and if it were to happen, the outcome next time might not be much different, regardless of who happens to be in the command center.

ICG was generally supportive of the report, but objected to the finding that the Omega block barricade had been improperly constructed:

ICG believes that the seals were built in compliance with the MSHA-approved plan using construction techniques that are consistent with industry practice. Furthermore, ICG believes the physical evidence demonstrates that the explosion forces at the seals significantly exceeded the 20 psi design strength requirement.

McAteer responded that "These blocks were pulverized,"

The report also made a number of recommendations -- but not, as some expected, recommendations for more laws or tougher enforcement. Whether for political reasons or pure pragmatism, McAteer's report acknowledges the political power of industry's arguments that we can't rush into laws and regulations mandating new technologies that haven't been fully proven, or where improvements may be "on the horizon." On one hand, the report rejects those arguments:

If we insist on waiting for perfect technological answers to the challenges facing us, we will wait forever. The unmistakable message of the Sago Mine disaster is that we cannot afford to wait. In this report we discuss technologies and techniques which are currently available, tested in underground mines in the United States and other mining countries, and which would immediately improve underground miners’ chances to escape or be rescued in an emergency. Incremental improvements should be adopted immediately while the search for better technologies goes forward.

But on the other hand, the report acknowledges and then moves beyond the obstacles:

We believe that it will be more productive and protective of miners’ safety to focus on what should be done immediately to address the largely systemic failures that unquestionably contributed to the tragic loss of life at the mine. While not ruling out the possible need for additional state or federal legislation at some point, this report does not call for more laws now. We find, rather, that West Virginia’s leaders and the state’s mining community have it within their power to implement all of the recommendations that we offer below.

The keys to immediate progress, in our view, are commitment, cooperation, and a willingness to pursue what we call ‘default options’ — that is, common-sense changes that can improve safety while we await the arrival of better technologies, equipment, and strategies. We have faith in miners’ ingenuity, and many of our recommendations are grounded in this approach.

The report then lays out examples of "default options," such as burying and protecting phone cables, which can be done immediately; making sure miners are fully trained in the actual use of the respirators while new, better functioning respirators are developed; building emergency shelters stocked with food, water, oxygen and communications gear while research is conducted into more sophisticated emergency refuge chambers; and the use of one-way text messaging systems already in use in Australia and in a few US mines while a two-way wireless communication system capable of surviving explosions is developed.

But many mine operators are reluctant to invest in such a system, because it may not work flawlessly in every part of the mine at all times, because it can only transmit one way, and because “something better” (wireless two-way voice communication) is on the horizon. Yes, but horizons can be deceptively distant. In the meantime, installing an interim system should be considered a ‘default option’ for safety-conscious West Virginia coal operators.

The question, of course, is how all of this gets done.

For a variety of reasons, some in the coal mining industry have never seen fit to put safety on a par with production. That must change — and, we believe, is changing. All that is needed now is the will to accelerate the momentum for change that began building in the dark hours after the outcome of the Sago disaster, when the governor of West Virginia pledged that the miners lost in that disaster would not be forgotten in the way that so many thousands of miners lost in the past have been forgotten. We wholeheartedly support that pledge and seek to help fulfill it.

Excuse me for being a bit skeptical here, but that's my nature from being in Washington going on three decades. The history of workplace safety shows that progress is never made until there are bodies to count, and lots of them. Look at the last 7 months. Even after the Sago and Alma mine disasters, Congress didn't act. In fact, the House of Representatives had to be dragged, kicking and screaming, even to hold a hearing. It wasn't until the five miners were killed in the Kentucky Darby mine in May, in conditions shockingly similar to those at Sago, that Congress finally acted. And even then, many experts, family members and politicians (such as Congressman George Miller) thought those bills could have gone much further.

The reality of the situation is that the US Congress, as well as the state of West Virginia (which passed a mine safety law long before the US Congress), have done all they're going to do legislatively for now. The regulatory process may grind on. Improvements will be made slowly. (In fact, MSHA today ordered all mines to strengthen seals to withstand 50 pounds per square inch of pressure, more than double the current standard of 20 pounds. The new requirement was part of federal mine safety legislation passed earlier this year. )

But nothing about the current administration (particularly its choice of Richard Stickler for Assistant Secretary of Labor for MSHA) indicates that we're going to see any radical moves on the regulatory or enforcement fronts. The fact is that the fires of workplace progress need constant feeding, and in this case, the steam has gone out. And none of that would have changed had the McAteer report called for new laws, stronger enforcement or hanging ICG and MSHA officials by their heels in the public square.

All of this may change, of course, if/when there's another mine disaster. And when that happens, the McAteer report will stand as a strong reminder: We told you what needed to happen; we warned you, now reap the whirlwind.

But whirlwinds don't happen by themselves, or by divine intervention. We need to be organized and ready. Hopefully, this report gets us part way there.