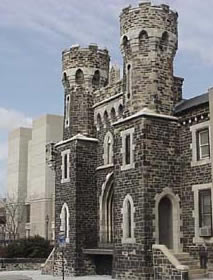 One area of occupational safety that we don't cover much here are the work hazards experienced by correctional officers, or as some know them, prison guards.

David McGuinn, 42, was counting inmates alone in the maximum-security prison late Tuesday when he was attacked and stabbed several times in the neck and back, said Maj. Priscilla Doggett, a spokeswoman for the Maryland Division of Correction.

The Maryland House of Correction, built in 1878, has been wracked by violence in recent months. Three inmates have been killed there since May, and inmates assaulted two officers in April. Doggett said officials don't believe the assaults were related, but they are investigating that possibility.


While at AFSCME, I had to investigate several incidents that occurred in prisons. And whether you're touring the cell blocks, or attending a meeting in the building, they're creepy places. But despite the fact that your job is to oversee dangerous prisoners, the hazards of correctional institutions are no different than other workplace hazards: they're well known and their are well-recognized systems that can be put in place to minimize or eliminate them. In other words, as with most workplace safety and health problems, injuries and fatalities in correctional institutions are laregely preventable if management is doing what needs to be done.

Understaffing, unreliable equipment and poor leadership are among the problems contributing to deteriorating working conditions at the prisons, union representatives claimed.

"When you have more inmates, more dangerous inmates, it's the wrong time to cut the number of security employees, which this administration has done," said Sue Esty, legislative director of American Federation of State, County and Municipal Employees Council 92.

For Maryland Correctional Institution officer Kenny Neely, conditions in the prisons have made going to work miserable.

"It used to be something I was proud of. I'm not anymore. It's just a job," Neely said. Because the prison is short-staffed, Neely said he typically works 48 hours a week, including shifts on Friday, the first day of his weekend.

The inmates escaped from their cells despite a prisonwide lockdown, apparently by jamming the locks on their cell doors, and then returned to their cells after the attack, authorities have said. According to the documents, "a device commonly used by inmates to prevent their cell doors from locking" was found on the ground outside Harris's cell.

Ron Bailey, executive director of the American Federation of State, County and Municipal Employees union, which represents corrections officers, confirmed yesterday that inmates at that facility and others "come up with all types of homemade devices" to jam locks. Decks of cards, tape and hard plastic objects of many kinds can be put to that use, Bailey said.

McGuinn, 42, was the second Maryland and the first to be killed inside a prison since 1984.

McGuinn was the second Maryland corrections officer to be killed this year. Roxbury Correctional Institution officer Jeffery A. Wroten was shot in the face with his own gun while guarding a prisoner as he underwent treatment at Washington County Hospital January 27.

Before this year, the last killing in the Maryland correction system occurred in 1984.

Union officials said that doesn't mean guards haven't been attacked in the past 22 years. Just a couple weeks ago, a guard was stabbed in the arm while trying to subdue an inmate in his cell.

Bernard W. Ralph Jr., president of the local AFSCME union, said officers always getting punched in the mouth and thrown down steps.

"You don't hear about that, but it happens everyday," Mr. Ralph said.

The Baltimore Sun is calling for the state to shut down the ancient prision, calling the situation a "full crisis."

When three inmates at the state's maximum-security House of Correction manage to foil a prison lockdown to murder a correctional officer, the Jessup prison has gone beyond troubled. It's in full crisis.

Officer David McGuinn was killed hours after state prison officials announced the appointment of a new warden at "The Cut," the prison's nickname. But changing a warden won't secure this prison. It's understaffed and ill-suited to an increasingly violent population; without a major state commitment, the warden won't be able to reform the prison culture there.

Officer McGuinn, 41, wasn't stabbed to death while breaking up a fight or subduing a fleeing felon. His murder was a targeted assassination. What's worse, shockingly so, is that prison officials had been warned of a possible attack on an officer. And still prisoners pulled it off.

Those are short-term fixes. The House of Correction, which dates to 1878, doesn't meet the housing needs of its hard-core inmates and offers no programming to constructively address their lengthy stays, which average about 10 years.

The state can't delay demolishing the prison any longer - it has been talked about for years - because it takes five years to build a maximum-security prison. Until then, prison officials should reduce the inmate-to-prison-guard ratio at the House of Correction and give priority to restoring its full complement of guards. But in a corrections system that is down 500 guards, securing one prison may come at the cost of another.

The officer's union, AFSCME, requested a meeting with Maryland Governor Robert Ehrlich to discuss conditions in the prisons system. Ehrlich, a Republican, refused to meet with the union because he wanted to focus to remain on the family:

“The death of Officer McGuinn is a tragedy, and my heartfelt prayers go out to his family,” Ehrlich said in a statement. “His death is a reminder to us all of the danger that law enforcement professionals like Officer McGuinn face every day.”

In other words, prisoners are bad people, prisons are dangerous, what do you expect, let's move along:

“We realize we’re trying to manage a population that is violent and given to committing acts of violence,” she said.

One other point I forgot to make yesterday: You'll notice the complete absecne of any mention of OSHA in the coverage of this incident. Why? Aren't corrections officers workers? Aren't there plenty of policies and guidelines (even if no speicific OSHA standards) that describe measures that can be taken to prevent these incidents (e.g. staffing, working alone, etc?) Despite OSHA's forays into the area of workplace violence in the 1990's, they have been extemely reluctant to get involved in prison issues (unless officers are being exposed to chemicals from prison factories, or bloodborne pathogens.) When it comes to staffing, or dealing with "bad guys," as opposed to bad chemicals or bad germs, OSHA generally leaves the solutions and sanctions to the employers (prison officials) and state corrections officials, a practice that would not be tolerated when it comes to more common workplace hazards like machine guarding or exposure to chemicals.