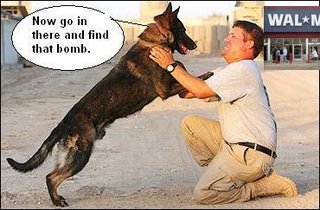 You've got to hand it to Wal-Mart. In these days when the whole world lives under the threat of terrorism, Wal-Mart in Canada is at least providing useful training for its employees -- as bomb sniffing dogs.

Why did Wal-Mart clear customers out of a Quebec store and then order 40 of its workers to stay in the store and search for a bomb? On July 5 workers at a Wal-Mart in St-Jean-Sur-Richelieu, Quebec were ordered by Wal-Mart to help police search for a bomb, even though police recommended to Wal-Mart that the store should be completely evacuated.

An investigation is underway and some of the workers continue to be traumatized from the forced search.

This was a pretty sad message about how much value Wal-Mart puts on the lives of its workers", says Wayne Hanley, national director of UFCW Canada (United Food and Commercial Workers Canada).


One area in which Wal-Mart neglected to train its employees was in their health and safety rights:

Luckily, no bomb was found.

Au contraire, says Wal-Mart. They were all volunteers:

Yanik Deschenes, a Wal-Mart spokesperson, said in an interview with the Canadian Press news agency that the company was only helping police and not endangering employees. Deschenes confirmed that 40 sales clerks were asked to search for the bomb, but insisted nobody was forced to search the store.

"We will never put in jeopardy the security of our employees," he said. "Never, never, never (will) we force them to do such kinds of investigations. If this associate had said or all the associates had said, `We don't want to participate,' there would be no problem. They would have been able to leave the building without hesitation."

And without coming back, knowing Wal-Mart.