House Set To Do Harm To Chemical Plant Security 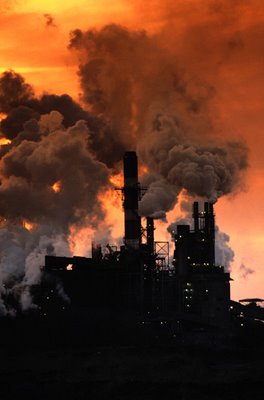 A House of Representatives committee votes this morning at 11:00 a.m. EST on a chemical plant security bill (H.R. 5695).

And when it comes to chemical plant security, the New York Times is pretty fed up with the chemical industry and Congress for kow-towing to the chemical industry's dislike for inherently safer production and their desire to pre-empt state protections that are stronger than the federal government's.

Nearly five years after Sept. 11, Congress has still not passed a law reducing the risk of mass casualties from an attack on a chemical plant. A bill has been slowly working its way through the Senate and the House, but the chemical industry is committed to making it so weak that it could actually make plants less safe. The House Homeland Security Committee is expected to vote tomorrow on two amendments that are important to making this a real chemical plant security bill.

The first amendment would require some high-risk chemical plants to replace the most dangerous chemicals with safer alternatives. It is a relatively mild proposal, since it does not cover all plants, and it gives the plants a large role in the decision about which safer technologies they should adopt. But the industry is fighting for its right to use whatever chemicals it deems best, or most profitable, no matter how much risk that poses to people who live, work and attend school nearby.

A second critical amendment would make clear that states have the right to regulate chemical plant safety more strictly than the federal government. The chemical industry wants the federal bill to expressly pre-empt, or invalidate, state safety rules. It says it wants a single national standard to avoid "confusion." But what the industry really wants is a weak national standard that prevents states from taking a more serious approach to the terrorist threat.

Tomorrow's votes will likely be decided by a few moderate Republicans, including Christopher Shays and Rob Simmons of Connecticut, and Curt Weldon and Charlie Dent of Pennsylvania. They could decide whether this important homeland security bill actually makes the nation more secure.


The House vote, by the way, is Thursday (today!) at 11:00 am. If any of these are your Congressmen, they could use a call if you've got a minute:

The bill (H.R. 5695) the Subcommittee adopted July 11th is fatally flawed as it will do little to protect communities because: