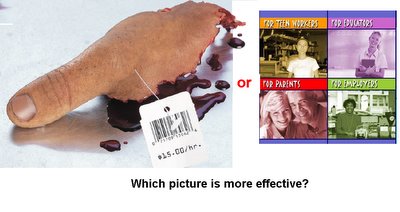 Here's one problem that Canadians and Americans share: How to get through to teenagers? Even if they actually listened to you, it wouldn't matter because they already know everything.

Another problem that Canada and the United States share is young workers getting hurt on the job, especially during summer vacation.

The US Bureau of Labor Statistics reports that in 2004, more than 38,000 teen workers were injured on the job, and another 134 were fatally injured. Meanwhile, in British Columbia, Canada, WorkSafe BC reports that 151 workers were seriously injured on the job lasat year and 11 were killed. Worksave BC administers the Workers Compensation Act for the B.C. Ministry of Labour and acts as BC's OSHA, setting and enforcing workplace safety standards.

Both the United States Government and WorkSafeBC have launched campaigns to educate their young people about workplace hazards.

But that's were the similarity ends.

You've heard the phrase "One picture is worth a thousand words?" Well, looking at this new campaign by WorkSafe BC (British Columbia), I'd say it's more like 10,000 words."

WorkSafeBC's new Demand Safety campaign, aimed at young workers, is graphic, shocking, and sure to attract attention. And that's exactly the point.

"What young workers told us in focus groups is that they want to see consequences," says Scott McCloy, WorkSafeBC's director of communications. "They want to understand what can happen to them in a workplace. They want to be shocked."

Graphic and shocking are an understatement. Check out their posters, but beware -- they're not for the squeamish. The one at the top is probably the mildest. Viewer discretion is recommended.

McCloy says you can try to fill kids with all of the statistics, but

As shocking as these statistics are, Scott says that they don't necessarily resonate with young workers, who tend to believe "it won't happen to me," and may sacrifice safety for the sake of a steady income. Demand Safety materials include personal testimonials from young people who have been hurt on the job. These testimonials give meaning to the statistics, driving home the point that every worker is vulnerable. The campaign will also educate workers about their right to demand safety and explain how to speak to their superiors about workplace dangers.

The campaign's webpage also has factsheets on knowing your rights and how to speak up and what safety questions to ask your new boss.

Now, compare and contrast with OSHA's campaign, and these words from OSHA Assistant Secretary Ed Foulke:

OSHA actually has a fact sheet on workers rights and your right to refuse imminently dangerous work, although you wouldn't know it from Foulke's speech or OSHA press releases.

So, which do we think is more effective? Ripped off body parts or smiles? Advice to "be careful" or education about your right to demand safety?

As the father of a mouthy 15 year-old boy with attention-deficit disorder who hates to read, I think that WorkSafe BC may be on to something here. And maybe they shouldn't be limited to just kids.

Hat tip to rawblogXport for this.